In the days leading up to the $20 million Saudi Cup at King Abdulaziz Racetrack in Riyadh, Saudi Arabia on Feb. 20, usracing.com will profile the contenders in the world’s richest horse race. The profiles will be updated with odds, post positions and jockeys following the post-position draw on Wednesday [Feb. 17].

He pulled off a huge, gutsy upset in beating a handful of Group 1 winners in the $673,000 Bahrain International Trophy last November, so who says Simsir can’t do it again in the $20 million Saudi Cup? 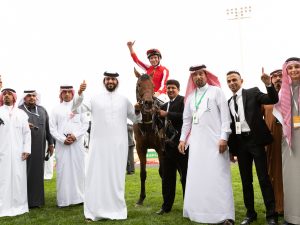 Bred in Ireland and now based in Bahrain after being purchased privately last summer by owners Victorious and trainer Fawzi Nass, Simsir was a gallant winner in that race. The 5-year-old gelding gave up the lead with about 100 meters to go but fought back and beat John Gosden-trained Global Giant by a neck, with Aidan O’Brien-trained Sovereign a close third and another Nass trainee, Port Lions fourth.

The win was so impressive that Nass, who also keeps a stable in Dubai, is looking for another big score in Saudi Arabia. Last year, he won the first ever turf race at the track with Port Lions upsetting Deirdre, Japan’s star mare, in a race now called the Neom Turf Cup.

Simsir gets his chance to step up again on Saturday.

“Simsir is doing well. He’s had an easy time since winning the Bahrain International Trophy in November, so we thought, if we’re going to go to Saudi, we needed to get a run into him,’’ said Nass.

“He finished a close fourth,’’ said Nass. “Things didn’t go his way, he missed the break and he had to come from behind, which doesn’t suit a galloping horse like him. He didn’t disgrace himself and we’re happy with that being his prep run for Saudi Cup.”

Notes: Simsir’s former trainer was Ireland’s Michael Halford before being purchased in July 2020 after finishing fifth in the Northfields Handicap at the Curragh … Simsir arrived in Riyadh on Monday night [Feb. 15], and went “out for a trot on the small track next to the quarantine. He is in good form. I think he traveled well, he ate up his food last night, so all is good,’’ said Nass … Nass on the weekend Saudi Cup meeting: “[It] is very important, especially for us in Bahrain, as we look at Saudi Arabia as the mother country. It’s always a pleasure to participate in those events in Saudi Arabia, so it would be nice if we can win another race again.”