The second Saturday of racing’s summer season is upon us, with the $1 million Queen’s Plate (G1) at Woodbine Racetrack the showcase event on a day also featuring the $250,000 Mother Goose (G2) at Belmont Park, the $250,000 Princess Rooney (G2) at Gulfstream Park and the $125,000 Bashford Manor (G3) at Churchill Downs.

The Queen’s Plate is the first leg of the Canadian Triple Crown, and a field of 14 was entered for the 160th edition of the oldest continually run race in North America. The other two legs are the Prince of Wales at Fort Erie on July 23 and the Breeders’ Stakes at Woodbine on Aug. 17. 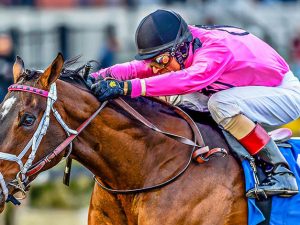 The 1 ¼-mile Queen’s Plate for 3-year-olds over Woodbine’s Tapeta all-weather surface is restricted to Canada breds, and has produced its share of fillies taking on the boys. The past two years, fillies have come out on top, with Holy Helena winning in 2017 and Wonder Gadot winning last year en route to earning Canada Horse of the Year honors.

On Saturday, Sam-Son Farm’s Desert Ride will attempt to make it three fillies in a row, the fourth in six years and 38th overall. A daughter of Candy Ride, by Fun in the Desert, the bay is trained by Neil Howard. The filly has won 3-of-4 and comes into the race off a win in the Woodbine Oaks. Sam-Son, headquartered in Milton, Ontario, Canada, is looking for its sixth win in Canada’s biggest horse race.

In the Oaks, Desert Ride was sixth when the field turned for home, but closed with a strong finish under jockey Steve Bahen to catch the leaders in the final yards and win by a neck.

“That’s been her running style,’’ said Howard. “She likes to get her feet under her a little bit. She’s a charm. She just does not concern herself with anything. She has a wonderful mind. Good horses, most of the time, they have that good demeanor.” 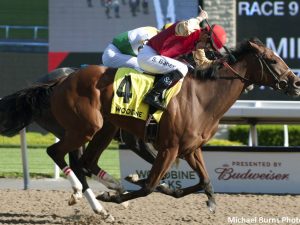 Desert Ride, with Bahen back in the saddle, drew the No. 1 post and is the 8-1 fifth choice on the morning line.

The 5-2 favorite is Avie’s Flatter, Canada’s 2-year-old champion male, who drew the No. 14 and outside post. The son of Flatter is trained by two-time Queen’s Plate winner Josie Carroll and will be ridden by Hall of Famer Javier Castellano.

“The outside post is probably not ideal but it’s a long  way to the first turn and it’s a mile-and-a-quarter race,’’ said Carroll. “So, I’m not going to have too many concerns about being outside.”

Avie’s Flatter opened her 3-year-old campaign with a win in the Transylvania Stakes (G3) at Keeneland on April 5 and ran sixth in the American Turf (G2) at Churchill Downs on May 4.

Trainer Mark Casse, who won the Preakness (G1) with War of Will and Belmont Stakes (G1) with Sir Winston, has two entries – Skywire and Federal Law – as he seeks his third Queen’s Plate and second straight. He’s won with two fillies, Lexie Lou in 2014 and Wonder Gadot.

Despite his first classic wins in the American Triple Crown series, the Canadian racing Hall of Fame trainer says he’s been looking forward to the Queen’s Plate for a long time.

“There has been a lot said about us winning the Preakness and winning the Belmont,” he said recently. “That brings me great joy, but anybody that says that to me, I say, ‘I think we can win the Queen’s Plate. That’s important to us. Given the wonderful year we’ve had so far, I’d love to add the Queen’s Plate to it.”

Skywire, the 4-1 third choice, drew the No. 10 post. The son of Afleet Alex is co-owned by Gary Barber, who owns Wonder Gadot and Sir Winston. Skywire will be ridden by two-time Queen’s Plate winner Eurico da Skywire. The bay colt is coming into the race off a win in the Wando Stakes on April 28 and a solid second in the Marine (G3) on May 25, both at Woodbine.

Federal Law, with Jamie Spencer aboard for Qatar Racing Limited, is 15-1. In his two most recent starts, the son of Scat Daddy won the Queenston Stakes on May 19 and ran second in the Plate Trial Stakes on June 8, both at Woodbine.

Wando, in 2003, was the most recent horse to sweep the Canadian Triple Crown. The Queen’s Plate is run on an all-weather surface, the Prince of Wales on dirt and the Breeders’ Stakes on turf. 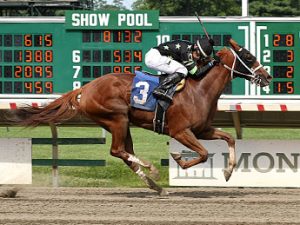 Back to defense her title, Stormy Embrace is the one to beat in the seven-furlong Princess Rooney. The 5-year-old mare trained by Kathleen O’Connell won last year’s edition by six lengths, and is the 4-5 morning-line favorite in a field of seven.

Since finishing off the board in last year’s Breeders’ Cup, Stormy Embrace has been second in the Sugar Swirl (G3), third in the Hurricane Bertie (G3) and most recently won the Musical Romance Stakes by 10  ½ lengths on May 18, all three races at Gulfstream Park.

In the six-furlong $250,000 Smile Sprint (G3) for 3-year-olds, Proforma seeks to add a graded-stakes win on dirt to a turf win last year in the Kentucky Downs Turf Sprint (G3). The 5-year-old gelding trained by Michael Stidham is 0-for-2 this year. The 9-5 morning-line favorite is Jalen Journey, making his stakes debut after winning three in a row at Gulfstream  since early March by a combined 17 ¼ lengths. Post time is 6:02 p.m. ET.

Dunbar Road, yet another of trainer Chad Brown’s lightly-raced but highly-regarded fillies, tops a field of six for the 1 1/16-mile Mother Goose.

Owned by Peter Brant, Dunbar Road won her first career start, then stepped up and finished second in the Gulfstream Park Oaks (G2) on March 30 and followed up with an allowance win at Belmont on May 30.

A daughter of Quality Road, Dunbar Road is the 4-5 favorite, leaving from the rail under Jose Ortiz.

On Belmont Stakes day, Brown sent Guarana to win the Acorn (G1) off a first-out victory.

Also in the field are Jeltrin, the 4-1 second choice, Classic Fit, Safta, Cassies Dreamer and Wings of Dawn.

Phantom Boss is the 9-5 morning-line favorite in a field of 10 2-year-olds entered for the 118th running of the six-furlong Bashford Manor on closing day of Churchill Downs spring meet.

An easy 2 ½ length winner in breaking his maiden at Santa Anita on June 2 in his second career start, Phantom Boss drew the rail and will be ridden by Rafael Bejarano.