War of Will Seeking Slice of Racing History in Belmont Stakes 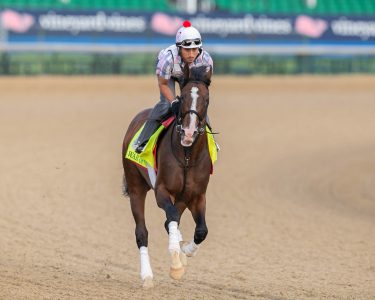 So you’re not too excited about the 151st running of the Belmont Stakes (G1) because there’s no Triple Crown on the line?

So you don’t really care about the race because neither Maximum Security, who finished first in the Kentucky Derby (G1), nor Country House, the runner-up declared the official winner after a historic disqualification, will be there to challenge Preakness (G1) winner War of Will?

Reboot, because a slice of racing history will be on the line Saturday, June 8, at Belmont Park, when War of Will attempts to become just the 11th horse to complete the Preakness-Belmont double without having won the Kentucky Derby — two less than there are Triple Crown winners.

The grueling Triple Crown series — three races over five weeks at varying distances and at different racetracks — has taken its toll on some of the top thoroughbreds that managed to win the Derby and Preakness but came up short in the Belmont. Among them: Carry Back (1961), Northern Dancer (1964), Spectacular Bid (1979), Alysheba (1987), Silver Charm (1997) and California Chrome (2014).

The Gary Barber-owned bay colt was involved in the jostling that the stewards blamed on Maximum Security. At the three-eighths pole and still in contention under jockey Tyler Gafflione, War of Will was forced outside by Maximum Security, bumping with Long Range Toddy, checking sharply, and finishing eighth (moved to seventh after the DQ).

Two weeks later, War of Will came through with an emphatic win in the Preakness, putting himself in position to join the likes of Hall of Fame horses including Nashua, Damascus and Point Given as Preakness-Belmont winners after Derby losses. The last 3-year-old to pull off this classics double after a Derby defeat was Afleet Alex in 2005.

War of Will is not yet showing the wear and tear of the Triple Crown grind. After the Preakness, he was returned to Keeneland, and on Thursday he was back on the track for the first time since.

“He was happy to jog and right now we’re just building up his energy,” said trainer Mark Casse’s assistant David Carroll. “He felt great soundness-wise. I’m sure in a couple days he’ll be wanting to do a bit more. But it was good to get him back under tack.”

Plans call for War of Will to be shipped to New York late next week, where a workout is likely before the Belmont, a 1 1/2-mile tour around the surface known as “Big Sandy” in a race known as the “Test of the Champion.”

For now, there could be nine challengers, with a chance for a few late additions. Tacitus is among the probables, along with Preakness runner-up Everfast.

Tacitus, one of the Derby favorites, finished fourth (moved to the third by the DQ) and is trained by Hall of Famer Bill Mott, who also conditions Country House. Everfast went off at odds of 65-1 in the Preakness.

The field may not include all the top 3-year-olds, but a victory by War of Will would likely put him atop the division as well as boost his credentials for Horse of the Year entering the summer season.

In other racing news from the past week:

“Once again, HBO’s Real Sports presented a slanted, distorted and inaccurate view of horse racing without acknowledging the important progress our entire industry is making with respect to safety, welfare and aftercare,’’ said NTRA President and CEO Alex Waldrop. “Today, the strongest push for a higher degree of safety and integrity is actually coming from within the industry, which, through its actions, is working every day to provide a safer environment for our equine and human athletes. The real facts about horse racing have been shared with HBO directly.”