Turf training wizard Chad Brown could have as many as three starters in the $1 million Pegasus World Cup Turf (G1) at Gulfstream Park on Jan. 25 after invitations were extended on Sunday for the second running of the race.

Brown, who campaigned likely Horse of the Year Bricks and Mortar to a perfect 2019 season that began with a win in the inaugural Pegasus World Cup Turf, has Instilled Regard and Without Parole on the main list of 12 invitees and Sacred Life as a first alternate of five reserve invitees.

The maximum field for the Pegasus Turf is 12, with post positions to be drawn on Jan. 22.

The others invited to the 1 3/16-mile race, which had its purse reduced to $1 million from $3 million by The Stronach Group a few weeks ago, include eight Grade 1 winners led by millionaires Arklow, Magic Wand, Henley’s Joy, Next Shares, Sadler’s Joy and Starship Jubilee. 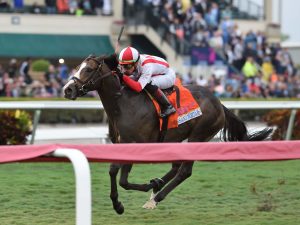 Instilled Regard, on the Triple Crown trail in 2018, prepped for the Pegasus Turf with a half-length triumph in the Fort Lauderdale (G2) at Gulfstream on Dec. 14, his second start after a six-month layoff.

Sacred Life won the Prix Thomas Bryon (G3) as a 2-year-old in his native France and owns one win from four starts in the U.S., finishing second in the Bernard Baruch (G2) and Seabiscuit handicaps last year.