Derby Top 10: Always Beware of Baffert in Run for the Roses

Let us not forget about Authentic, or Thousand Words. Or Bob Baffert. 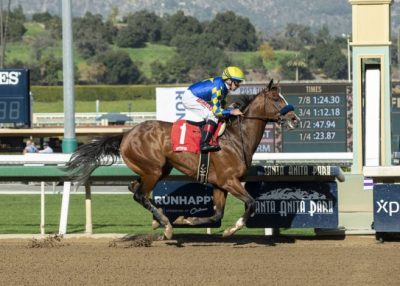 The five-time Derby and two-time Triple Crown winner has a strong pair in Haskell (G1) winner Authentic and Shared Belief winner Thousand Words. Both colts are prepping well for they take on ace Tiz the Law, hands down the top 3-year-old in the land.

No matter that Authentic barely hung on to win the Haskell at 1 1/8 miles and his ability to go the 1 ¼-mile Derby distance is in question. No matter that Thousand Words has been inconsistent. No matter that two Baffert unbeaten Derby prospects – Nadal and Charlatan – are sidelined.

Tiz the Law may be the Derby favorite when the morning-line odds come out Tuesday (Sept. 1), but Baffert’s duo is sure to provide bettors with some enticing odds. Imagine a Baffert horse at odds of great than 10-1?

Authentic had quite the extensive workout on Tuesday (Aug. 25), going a mile in 1:38.60 at Del Mar under exercise rider Juan Ochoa. He covered the first 5 furlongs in 1:00, according to the Daily Racing Form. He’ll work again Sunday, and is scheduled to arrive at Churchill Downs on Monday.

Not to me. Yes, Belmont Stakes (G1) and Travers (G1) winner Tiz the Law is No. 1 in my final usracing.com Derby Top 10, but Authentic and Thousand Words remain 2-3 – ahead of likely second- and third Derby betting choices Art Collector and Honor A.P. 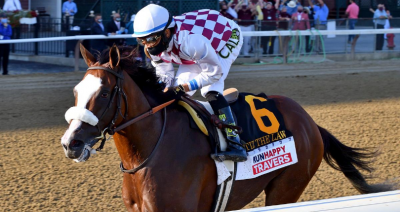 In my latest update, Max Player and Storm the Court join the top 10, and I’m starting to like trainer Todd Pletcher’s chances with Dr Post, who will be ridden by Tyler Gaffalione.

Derby contenders are arriving daily now at Churchill Downs, with the top horses set to show up on Monday (Aug. 31), including Tiz the Law from New York and Baffert’s colts from California.

Barely held on to win Haskell (under Hall of Famer Mike Smith), and will be ridden for first time by Hall of Famer Johnny V … Worked a mile in 1:38.60 at Del Mar on Tuesday (Aug. 25) … Only loss in five career starts was a second to Honor A.P. in Santa Anita Derby … No. 2 on Derby points leaderboard (200) … Next start: Kentucky Derby, Churchill Downs, Sept. 5 … Derby Future Wager Odds: 11-1.

Worked 5 furlongs in 1:00.00 at Del Mar on Sunday (Aug. 23), eighth fastest of 87 at the distance … May be ready for the race of his life after wiring field in Shared Belief (under Abel Cedillo) … Geroux will be aboard this colt for first time; had been ridden previously by Cedillo, Luis Saez, Gabriel Saez and Flavien Prat … No. 7 on Derby points leaderboard (83) … Next start: Kentucky Derby, Churchill Downs, Sept. 5 … Derby Future Wager Odds: 25-1.

Won Ellis Park Derby with authority and could be second betting choice on Derby morning-line … 4-for-4 in 2020 like Tiz the Law, with Blue Grass win putting him on the map … Worked 4 furlongs in 49.10 on synthetic surface at Skylight Training Center (Goshen, Kentucky) on Aug. 21 …  No. 3 on Derby points leaderboard (150) … Next start: Kentucky Derby, Churchill Downs, Sept. 5 … Derby Future Wager Odds: 8-1.

Worked 5 furlongs in 59.03 on Aug. 20 at Saratoga, second fastest of 25 at the distance … Runner-up finishes in three Derby preps, including the Haskell (by a nose to Authentic), make him a threat … No. 5 on Derby points leaderboard (110) … Next start: Kentucky Derby, Churchill Downs, Sept. 5 … Derby Future Wager Odds: 30-1.

A Derby without a Pletcher entry would be a surprise … Gaffalione replaces Irad Ortiz, Jr. aboard a colt who looks to be improving … Third in the Haskell, a nose behind runner-up Ny Traffic … Ran second in the Belmont Stakes … No. 8 on Derby points leaderboard (80) … Next start: Kentucky Derby, Churchill Downs, Sept. 5 … Derby Future Wager Odds: 40-1.

Apparently, Churchill Downs agrees with King G – he blazed 5 furlongs in 58.20 seconds on Aug. 22, and has one more work to go before the Derby … Avila says he’s “happy with how he’s taken to the track and his workouts the last two weeks.” … Owned by former MLB player Victor Martinez … Comes into race off a four-month layoff … No. 6 on Derby points leaderboard (90) … Next start: Kentucky Derby, Churchill Downs, Sept. 5 … Derby Future Wager Odds: 19-1.

Third in the Belmont, third in the Travers under trainer Linda Rice … Colt was sent to Asmussen barn to prepare for Derby (COVID-19 travel issues, work commitments keeps Rice at Spa) … Worked 5 furlongs in 59.60 at Churchill Down on Aug. 24, the second fastest of 48 at the distance … Withers winner could be a live long shot … No. 9 on Derby points leaderboard (60) … Next start: Kentucky Derby, Churchill Downs, Sept. 5 … Derby Future Wager Odds: 38-1.