Tips and Trends to Help You Win at Del Mar

It’s summer in Southern California, and for horseplayers that can only mean one thing: Del Mar is here!

The summer Del Mar season opens early on Friday (July 10) and will usher in California’s best and most anticipated meet. Del Mar will run three days a week, Fridays through Sundays, for nine weeks through Sept. 7.

For handicappers, Del Mar will be a welcome change from the small fields, limited race days, and sparse betting opportunities offered at the recently concluded Los Alamitos meet. Read on for some handicapping advice on what to look for in order to win “Where the Turf Meets the Surf” at old Del Mar. 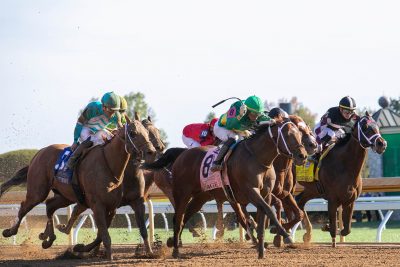 Del Mar’s main track certainly can be speed favoring, however, while the preference goes to betting speed, the track overall tends to play fair and the front-end preference could not at all be termed a “bias.”

In fact, most other racetracks, including the others on the SoCal circuit, tend to favor speed much more than Del Mar. This actually gives late runners a better chance to win, and turns a lot of Santa Anita closing losers into Del Mar rallying winners.

At the most commonly run distance at 6 furlongs on dirt, Del Mar will likely favor horses with tactical speed, capable of leading, pressing or stalking, but certainly not as much as at Santa Anita. Effectively, this means that come-from-behind horses do better at Del Mar than at the Santa Anita meet and certainly much better than at the Los Al meet that precedes it. At Del Mar, roughly 20 percent of all 6-furlong races are won wire-to-wire as opposed to nearly 30 percent at Santa Anita.

And so, this gives us our first solid betting angle at Del Mar: Downgrade front-runners who won at Santa Anita at 6 ½ furlongs and 7 furlongs, and upgrade pressing or close-up stalking horses coming from Santa Anita with tactical speed that came-up a little short in their recent starts.

Here is another Del Mar betting angle: At the distance of one mile (two turns), tactical speed tends to be a money-loser. The two best two ways to win at Del Mar at one mile on the dirt are to go to the lead (nearly 40 percent wins for horses on or close to the pace), or to close from more than three lengths off the pace (stalkers and closers account for 35 percent wins at that distance). That makes this particular distance the best for closers on the Del Mar main track, and by far the worst for pressers and close-up stalkers, who win at only a 25  percent clip at one mile.

Dirt races carded at 1 1/16 miles and beyond are becoming more and more infrequent at Del Mar, and the small sample size makes compiling winning trends useless. At the summer 2019 Del Mar meet, only seven dirt races were run at 1 1/16 miles or longer.

Post positions have not been mentioned until now because they have not been a reliable handicapping angle at any of the recent Del Mar summer meets on the main track, either in sprints or routes. The lone possible exception is specifically at the distance of 7 furlongs, where the inside two posts appear to be somewhat of a disadvantage. In summer 2018-2019, runners from post 1 won only two of 24 races, and post 2 won one out of 24 starts at 7 furlongs, so avoid the two inside posts at that distance.

Del Mar’s formful turf course is one of the best

On the turf, Del Mar cards some of the country’s best grass racing of the summer. In the era since Del Mar installed its new turf course the year prior to hosting the Breeders’ Cup in 2017, there actually has been little or no post position advantage or disadvantage on a course that plays fair at nearly every distance. 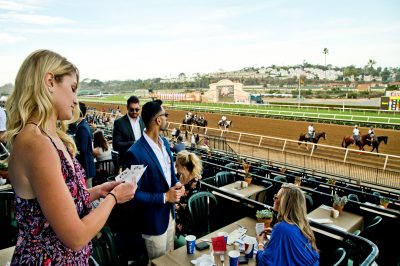 The vast majority of Del Mar’s turf routes are run at one mile or 1 1/16 miles. A few races each summer are run at 1 3/8 miles, and approximately 10 turf races per season are carded at 1 1/8 miles. The 1 1/8-mile distance appears to be the one turf trip at Del Mar where you don’t want to draw an outside post. The last two summers, only one out of 43 starters won from posts 8 and outward, and none won from wider than post 8.

In terms of running style preferences in turf routes, 20 percent of Del Mar’s races can be expected to be won on the lead, while 35 percent of these races are won by horses that are coming from more than three lengths back at the second call. This means two things — turf closers do much better at Del Mar than Santa Anita and should therefore be upgraded if they lost at Santa Anita, and the pace pressers and close-up stalkers account for 45 percent of the victories. It is this running style that does the best in Del Mar turf routes.

In turf sprints, Santa Anita turf sprint form often does not translate to Del Mar. Different horses win on these different turf courses. Early speed horses generally have better chances to hold on in Del Mar’s short 5-furlong turf sprints than at Santa Anita. As far as post positions are concerned, based on stats from the past two Del Mar summer meets, there is little or no advantage to be gleaned from inside, middle, or outside posts and horses from all parts of the gate win their share. Look for reversals of fortune in turf sprints at Del Mar versus what you see in the past performances from recent turf sprints at Santa Anita.

By using these simple running style and post position trends as a rough guideline, hopefully you will have a foundation for picking more winners at Del Mar in 2020. Enjoy the season and best of luck!