Once again, Mike Maker is loaded for the $1 million Calumet Turf Cup (G2) at Kentucky Downs on Saturday, with no less than four runners in a field of 12 going 1 ½ miles.

Even with the Friday scratch – and retirement – of 8-year-old Zulu Alpha, winner of the 2019 Turf Cup for Maker, the trainer still has four entries plus a fifth if also-eligible Dynadrive gets into the field with one more scratch.

The race for 3-year-olds and up is part of the “Win and You’re In’’ series with the winner earning an all-fees paid berth into the Breeders’ Cup Turf (G1) at Del Mar on Nov. 6. 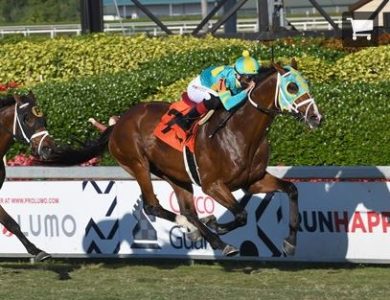 Tide of the Sea – Photo Courtesy of Coglianese Photo

The Turf is one of five graded stakes at Kentucky Downs on Saturday, the fifth day of the six-day meet with all the races on the turf. There’s another $1 million “Win and You’re In” race on the card, the $1 million FanDuel Turf Cup Sprint (G3) for 3-year-olds and up.

The Turf Cup and Turf Sprint are scheduled to be televised on NBC from 5-6 p.m. (see post times below)

This makes eight years in a row Maker has had two or more starters in one of the track’s top races, and he’s had at least one finish in the money seven straight years.

“I have a lot of horses that can go a mile-and-a-half on the grass, there are limited opportunities, and this purse is always lucrative,” Maker told the Kentucky Downs press office.

According to Equibase, Maker has saddled a record 22 starters in the Turf Cup and his purse earnings of $2,225,240 is a record, nearly $1 million ahead of Brad Cox, who will send out 3-1 favorite Arklow

Of the four, Maker is keen on Glynn County, who ran fifth in the United Nations (G1) at Monmouth Park and third in the Mr. D Stakes (G1) in his last two starts.

“Glynn County was a Kitten’s Joy and only had a couple of starts when we got him,” Maker said. “He’s a nice horse and I think you’re going to hear a lot of him in the future. He ran well at Arlington. I think he’s one of my better chances.”

The weather report is calling for sunny skies, temperatures in the 80s, and a 1% chance of rain.

Kentucky Downs, in rural southern Kentucky (Franklin) near the Tennessee border, has the racing spotlight to itself this weekend, with the Del Mar and Saratoga summer seasons complete, and Belmont and Santa Anita meets opening next week, along with a short meet at Churchill Downs. 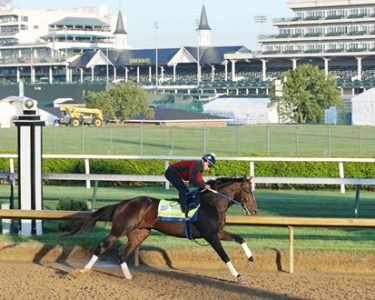 There will be 37 races in the series (one more than last year) that awards a sliding scale of points to the top four finishers. The 2020 Derby is set for May 7.

As it was last year, the 2022 Derby will be run with out the use of Furosemide (Lasix). Points will only be awarded to horses who compete on race day without Lasix in Derby prep races.

Venetian Harbor won the Monrovia Stakes (G3) at Santa Anita in June and second to Shedaresthedevil in the Clement L. Hirsch (G1) at Del Mar on Aug. 1.

Princess Grace is the 2-1 favorite in a field of nine for trainer Michael Stidham. Florent Geroux has the call leaving from post 2. Abscond is the 4-1 second choice.

The field of 12 is led by 7-2 favorite Casa Creed from the stable of Hall of Famer Bill Mott. The 5-year-old won the Jaipur (G1) two starts back at Belmont and ran third in the Fourstardave (G1) at Saratoga on Aug. 14.

Got Stormy is the 9-2 second choice for trainer Mark Casse coming off a victory in the Fourstardave. 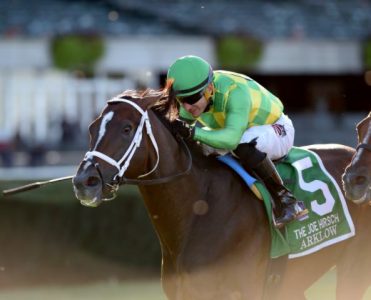 Arklow is the favorite, but trainer Mike Maker has four starters (maybe five) as he seeks his fifth victory in this $1 million race.

Arklow has not run well in his last two starts but did win two of three graded stakes prior to that. The 7-year-old was seventh in the Del Mar Handicap (G2) at Del Mar on Aug. 21.

Channel Cat is the second choice at 9-2 for trainer Jack Sisterson. Channel Cat is 1-for-5 this year – the win in the Man o’ War (G1) at Belmont and comes into this one off a fourth in the Bowling Green (G2) at Saratoga on July 31.