Margaret Ransom, an award-winning writer who has worked in the horse racing industry for decades, recently moved to Texas from California and started The Bridge Sanctuary. Its mission is to bridge the gap from forgotten horses to forever safe horses. Here’s her latest story.

A year ago, the well-respected thoroughbred trainer Beau Greely passed away. A month ago, The Bridge Sanctuary rescued the only Kentucky Oaks starter of Greely’s successful but all-too-brief career.

I can’t help but think how disappointed Greely would be to know a horse he took such pride in caring for was discarded like garbage after giving her entire life to the thoroughbred industry. The conditioner, who hailed from one of the most well-respected Kentucky families and was a fourth-generation horseman, always put the well-being of horses first, so it’s easy to assume what he’d think of this mare’s recent predicament and know he’d be upset.

Her Jockey Club name is Go For Glamour, but here at The Bridge we call her Vivian. She is certainly classy and glamorous, despite the cuts and scrapes she picked up in the pen, so the name – given to her by our board member who liked the old Hollywood starlet-type name — absolutely fits. 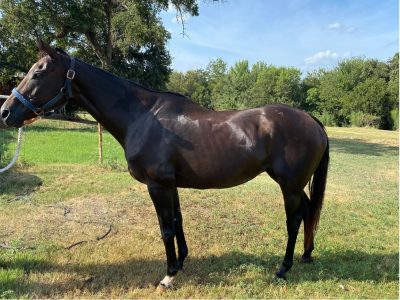 Vivian is a Kentucky-bred daughter of classic winner and millionaire Pine Bluff and the unraced Seeking the Gold mare Seeking the Cure. She was bred in Kentucky by the Andrea Singer Pollack Revocable Trust and campaigned by her Columbine Stables. Greely trained Vivian throughout her career, which ended in 2003 with a line of 12-2-2-3, $146,760.

Vivian finished third in the 2003 Santa Anita Oaks (G1) and Fantasy Stakes (G2,) and ran in that year’s Kentucky Oaks (G1), where she had a ton of trouble and finished last. Her exercise rider, Andy Durnin, said she lost both front shoes in the Oaks, which in hindsight likely contributed to her terrible trip, but he remembers Vivian fondly regardless.

“Yes I remember that trip, she lost both front shoes in the race and they were on good because I remember holding her for the blacksmith, Tom Halpenny, who was shipped in from California quite often (first class) to shoe for important races,” Durnin remembered of the time with Vivian back in Kentucky. “Like most cases she could have been shod in California before she left, but Beau wanted Tom. It was a wonderful time.

“I vividly remember getting on (Vivian) and she was always such a pro.”

Durnin would know. In addition to several Grade 1 winners and champions he routinely rode for Greely and other trainers, including Hall of Famer Neil Drysdale, he may be best known as the exercise rider for 2000 Kentucky Derby (G1) winner Fusaichi Pegasus.

Three more winless starts as a 3-year-old sent Vivian to Pollock’s broodmare band where she was bred to some of the best stallions in the game, including Into Mischief, Johannesburg, Harlan’s Holiday and First Samurai. Unfortunately, likely because she didn’t produce any stars, she was sold at Keeneland in November of 2018 for just $13,000 in foal to Goldencents and disappeared after he was born on February of 2019. Her price that day was just $500 more than what the stallion commanded at Spendthrift Farm for the 2018 breeding season.

That foal, Plenty of Cents, is currently training for his debut at Remington Park and is listed as having been bred by the person who signed the sales slip for Vivian at Keeneland three years ago.

Overall, Vivian had nine foals and seven winners, though none have earned any black-type so far, and her now 5-year-old son Kumar (by Into Mischief) is still slugging it out in New York claiming company without a ton of recent success competing nearer the bottom of the ranks. I reached out to his trainer and offered a safety net for him, too, should he ever need it. 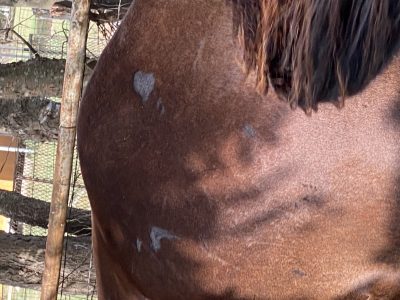 It’s hard to fathom why Vivian was found in Oklahoma in a lot at age 21, depressed with significant cuts all over her body. What she was doing for the 2 ½ years between having her final foal and then is a mystery, but she is now safe here at The Bridge.

One of the most disturbing things about Vivian’s situation is that another rescue (whose quarantine was full or she’d have gone there) told us they knew of several people and other rescues who expressed interest in saving her when her kill pen videos made the social media rounds, but when her racing connections didn’t return messages and texts asking for help she was left there, her fate tipping precariously between being saved and shipped. So, when I was made aware of her situation and after speaking to my board of directors, we all immediately agreed to save her.

Though The Bridge Sanctuary is a place of redemption and second chances, a place free of anger and blame, Vivian’s situation and the thought that broodmares — the foundation of the thoroughbred racing and breeding industry — are too-often dumped like garbage because they don’t live up to someone’s standards brings the anger.

And, quite frankly, a few tears. I want to know why it’s OK to sell an aged broodmare in foal at any auction without a security net in place for her future safety. We all know there isn’t enough money for aftercare to go around, but don’t broodmares who no longer produce or whose foals were never able to capture lightning in a bottle also deserve at least some of it? Don’t they deserve industry help when they are found in situations, like Vivian’s, that they don’t deserve to be in?

I don’t have answers, but I’d like to think there are some. For everyone who does right by their mares, there is another who doesn’t, putting the value of their very lives only on what they produce and how much money can be made off them.

It’s a cliché, but since she arrived here at The Bridge, Vivian is looking and feeling like a girl half her age. Her cuts are mostly healed, she is out of quarantine and roaming the acreage, once again living her best life and the life of luxury she more than earned. She has bonded with our other dumped broodmare, Blanche, and they are best friends. And she and George have sparked a small romance. 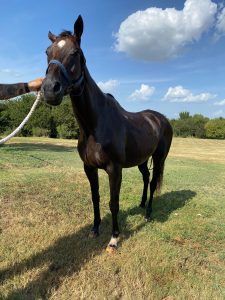 No matter what, Vivian will always and forever be safe and fed and loved and cared for. She is inherently kind and happy, curiously watches the goats and the donkeys in the paddock near her stall, is the first to whinny at me in the morning when I step into the barn and the last one for kisses and treats before bed. She is a good eater, loves the first sip from a freshly scrubbed water tub or bucket and prefers cheap apple wafers to mints or even carrots, so we have a giant bag of them just for her.

I’d sure like to know more about her life, especially the past 2 ½ years, so if anyone knows and can fill me in, I’d be grateful.

Greely and I were not friends when he was a California-based trainer, though we were friendly and the same age. And we had a lot of the same friends and saw each other socially quite a bit. I was fortunate to watch him train, however, and knew he was as good a horseman as they come. I wrote about a few of his charges way back when writing about racing was my passion, though never Vivian unfortunately. And knowing what I do know about the trainer I have to believe he’d be appalled she was in the precarious position she was found in and relieved she’s safe.

We have incurred some sizeable costs since Vivian arrived and aside from paying her bail, she was in desperate need of farrier work and some special veterinary care, including vaccinations and dental work. If you want to help us help Vivian, please reach out.

The Bridge Sanctuary is a 501(c)(3) non-profit and Texas corporation, so donations are tax deductible. You can donate on our website at thebridgesanctuary.com, PayPal at thebridgeintx@gmail.com Venmo at @TheBridge-Sanctuary.

I owe a lot of gratitude to the people here at USRacing.com who support my mission to help the horses and let me write about the issues in thoroughbred racing and breeding that mean something to me.

Rest in peace, Beau. This girl is safe.