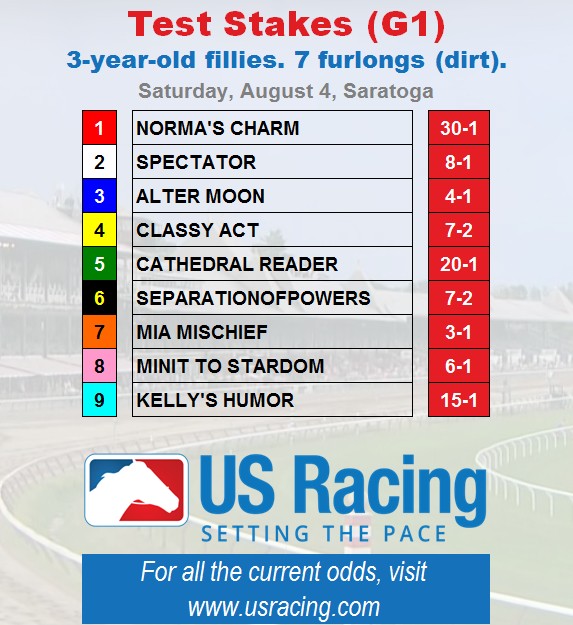 A field of nine sophomore fillies is expected to head postward and tackle the seven-furlong distance of the $500,000 Test Stakes (GI) Saturday at Saratoga. The Whitney Stakes (GI) undercard feature serves as the primary prep for the main event for fillies at the Spa, the Alabama Stakes (GI), later in the summer.

Since the Test was first contested in 1922, dozens of fast fillies have collected a victory for their proud connections — especially from the 1960s until now, with names like Moccasin, Gamely, Ta Wee, Numbered Account, Desert Vixen, My Juliet, Lady’s Secret, Safely Kept, Go For Wand, Versailles Treaty and Indian Blessing.

A year ago, multiple Grade 1 winner American Gal shipped in from California to collect the win by an impressive four lengths and the only runner who even comes close to resembling a shipper is last year’s Sorrento Stakes (GII) winner Spectator, who was transferred to trainer Michelle Nevin’s care a few weeks ago making her second New York start.

Klaravich Stables’ Separationofpowers broke her maiden a year ago by a whopping 11 lengths and after finishing third as the favorite in the Spinaway Stakes (GI) in her second start, the Chad Brown-trained daughter of Candy Ride graduated to stakes winner in Belmont’s Frizette Stakes (GI), before a a fourth-place effort in the Breeders’ Cup Juvenile Fillies (GI) on Nov. 4 at Del Mar. She returned after an eight-month break for another fourth in the Victory Ride Stakes (GIII) a month ago, but had some legit trouble, which has Brown hoping for a better finish here.

“She’s doing really well coming in, so we’ll send her in and see what happens,” Brown said. “She had a terrible break last time and stumbled. It was a tough trip, but she got the race she needed. Hopefully, she moves forward off that first start of the year and runs a big race in the Test.”

She’s been working well, has the talent to post big figures into the triple digits and is likely to get the decent pace she prefers to make her run from the back of the pack. Her regular jockey, Jose Ortiz, returns for the mount.

Click HERE to get the latest odds on the Test Stakes

Brown will also tighten the girth for the first time on stakes winner Alter Moon, who makes her New York debut here under Javier Castellano. She’s improving and has won two of three at the distance, her big question mark being if she can handle the class hike.

Eight Belles Stakes (GII) winner Mia Mischief, who is as consistent as they come with only one off-the-board finish (in her last start when fifth in the Victory Ride), has a win and a second from two tries at the distance and has been looking well under the care of trainer Steve Asmussen training over at Oklahoma (training center) for a few weeks. She will certainly be part of the early pace scenario and if she can hold off the late charge, her numbers overall suggest she has a big shot for the win. Ricardo Santana Jr. returns for the mount.

Spectator, a pretty chestnut daughter of Jimmy Creed, seemed off to a good start after winning her first two starts a year ago, including the Sorrento, and followed it up with a third in the Del Mar Debutante (GI) before slight injury sent her to the sidelines for the winter. After an allowance win and a second to Midnight Bisou in the Santa Anita Oaks (GI) earlier this year, she made the transition to Nevin and, after a flat sixth in the Victory Ride, returns here. The distance shouldn’t be too tough (though she may just be a sprinter) and she’s been working well. Plus, she will have the benefit of Hall of Famer John Velazquez in the irons. She figures for a stalking trip and if she’s as good as her connections believe she can be, she figures for a shot.

Kelly’s Humor, who drew the far outside, picks up jockey Joel Rosario after an even third-place finish in the Indiana Oaks (GIII) and the Brad Cox-trained daughter of Midnight Lute is cutting back to a distance for which she has earned two seconds. Her numbers are decent and she should be sufficiently fit.

Classy Act, who has placed but has never won a stakes race, finished 10th in the Kentucky Oaks but returned to win an optional claiming race at Churchill Downs before a decent second in the Victory Ride last out. She’s won her only start at this distance, has been training well over the Oklahoma surface for a few weeks and gets regular rider Brian Hernandez Jr. back aboard.

“She got a tough beat in the Victory Ride, it looked like she was the best horse, but she shipped straight from Belmont up here and has settled in,” Calhoun said. “She proved that she can fit with [this] group in the Victory Ride.”

She can earn figures good enough to be competitive here, should have no trouble getting to the lead or in position just behind the speed from her post of four and may be a strong candidate for the victory here.

Stakes winner and Louisiana-bred Minit to Stardom has had almost as many layoffs as races in her three-start career. She certainly seems to have some talent and will no doubt be part of the pace scenario here, but this seems like a very tough bunch to make her graded debut against.

Cathedral Leader struggled in her first start against winners last time and this competition is no easier. Hard to imagine the Dallas Steward trainee will improve enough to be effective.

Norma’s Charm, who took a while to break her maiden, has shown some success in non-graded stakes down in Maryland, but this seems a tough spot to make a graded stakes debut.

The Test is one of five stakes on the Saratoga Saturday card, highlighted by the $1.2 million Whitney Stakes (GI), and has been carded as race 8, with a post time of 5:10 p.m. ET. It will be shown nationally on NBCSN, which will have live coverage from the Spa from 5-6 p.m. ET.