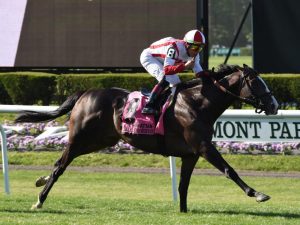 What’s been anticipated ever since he crossed the finish line first in the $4 million Breeders’ Cup Turf (G1) to complete an undefeated 2019 campaign became official when Bricks and Mortar was crowned thoroughbred racing’s Horse of the Year.

The announcement of Horse of the Year was the final of 17 equine and human Eclipse Awards presented at the 49th edition of the year-end honors at Gulfstream Park on Thursday night, Jan. 23.

Bricks and Mortar received 204 out of a possible 241 votes to become the first turf horse to be Horse of the Year since Wise Dan won in 2012 and 2013.

“Thanks for this extraordinary honor,’’ said Seth Klarman, a co-owner of Bricks and Mortar. I never thought we’d have a chance to win this award, and I’m grateful to the voters.” 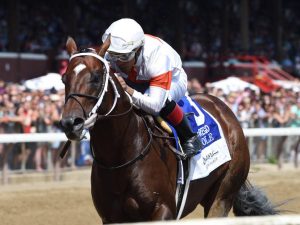 The other Horse of the Year finalists were Mitole, who won an Eclipse Award as champion male sprinter, and Maximum Security, voted 3-year-old male champion.

Bricks and Mortar stood head and shoulders above all others in his 5-year-old and final season. The son of Giant’s Causeway had a perfect 6-0 run in 2019, including five Grade 1 victories at five different tracks starting right here at Gulfstream Park in the inaugural Pegasus World Cup Turf (G1).

Bricks and Mortar was retired after the Breeders’ Cup, and now stands at Shadai Stallion Station in Japan, his breeding rights having been purchased by Teruya Yoshida’s Shadai Farm last summer.

Bricks and Mortar also won an Eclipse Award as top older male turf horse – in a unanimous vote over Mo Forza and World of Trouble. Brown (204 first-place votes) won as top trainer for the fourth year in a row and Irad Ortiz, Jr. (205 first-place votes) for the second straight year. 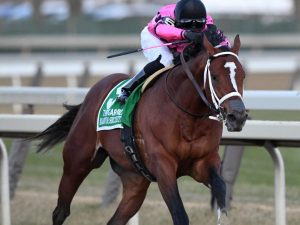 Maximum Security, the Florida Derby (G1) winner, finished first in the Kentucky Derby (G1), but was DQ’d to 17th for interference, sat out the rest of the Triple Crown races, and went on to win his final three races of  2019, the Haskell (G1), the Bold Ruler (G3) and the Cigar Mile (G1).

Vino Rosso (129 votes) beat out Mitole (108 votes) and McKinzie (3 votes) for older dirt male in one of the closer votes.

After winning the Pegasus World Cup Turf, Bricks and Mortar reeled off Grade 1 victories in the Turf Classic at Churchill Downs, the Manhattan at Belmont Park, the Arlington Million at Arlington International, and the BC Turf on Nov. 2.