Over the summer, on Aug. 1 to be precise, one of the bigger upsets of the year took place at Saratoga Race Course, also known as the ‘’Graveyard of Champions.’’

On that sunny day at the Spa, and with no spectators at the track due to the COVID-19 pandemic, Vexatious outdueled the champion mare and 3-10 favorite Midnight Bisou by a neck in the $500,000 Personal Ensign (G1). The victory was a stunner, but it also gave trainer Jack Sisterson his first Grade 1 since moving out on his own in 2018.

We bring this up because on Saturday at Aqueduct, Sisterson will send out two horses in the $250,000 Cigar Mile (G1), the final Grade 1 of the year in New York, with hopes of pulling off another upset.

Taking on the likes of Performer, the 7-5 favorite looking to extend his winning streak to six, 5-2 second choice Firenze Fire, and  9-2 third choice King Guillermo, Sisterson will send out True Timber (15-1) and Bon Raison (20-1) for Calumet Farm.

But the ever optimistic Sisterson feels like the time is right for True Timber to end a 13-race losing streak in a big way.

“He’s been close to winning a race like this and is peaking at the right time,” Sisterson said.

Last time out, True Timber ran second in the 7-furlong Lafayette Stakes at Keeneland on Nov. 7, and previously was fourth in the Vosburgh (G2) at Belmont on Sept. 26.

“He got stuck down at the rail running three-quarters at Belmont [in the Vosburgh]. He just wasn’t happy,’’ Sisterson said. “He’s a horse who likes his own way and we learned that in the mornings. We let him put his feet where he wanted to and put him in a happy frame of mind and he moved forward extremely well.

“His coat looks good, his appetite is great and his energy level is high. He’s shown that he wants to do more.”

And maybe the third time will be a charm in the Cigar — True Timber finished second to Patternrecognition at 31-1 odds in 2018; and third behind Maximum Security and Spun to Run at 32-1 odds in 2019. 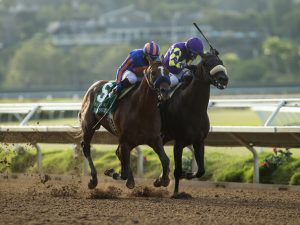 The 6-year-old son of Mineshaft is making his fifth start since Sisterson took over as trainer after Kiaran McLaughlin retired to become a jockey agent.

True Timber drew the No. 8 post and will be ridden by Kendrick Carmouche. Firenze Fire, third in the Breeders’ Cup Sprint (G1) on Nov. 7 for trainer Kelly Breen, is a possible scratch if it rains – and the forecast is calling for rain all day Saturday.

Bon Raison, meanwhile, comes into the race off a 10th-place finish in the BC Sprint. Prior to that, he won his first race since Sisterson took over as trainer on Oct. 16, albeit an optional claimers at 6 furlongs. But the 5-year-old is back at a familiar track – he’s 3-0-2 from 13 starts at the Big A. He ran 21 times in 2019 and starts his ninth race of 2020 on Saturday, leaving from the outside post under Jorge Vargas, Jr.

“He’s got a late running style and he just seems to be a versatile horse,” Sisterson said. “He’s got talent and he’s intelligent. He has those attributes where he can do what you ask him to do.”

Of course, Performer seems to be coming to the top of his game for trainer Shug McGaughey. The 4-year-old son of Speightstown, though, is stepping up to a Grade 1 for the first time.

It’s been an odd career so far. He ran third in his debut in November, 2018 at the Big A. He won all four races last year, including a win in the Discovery (G3) in November, 2019. Performer did not race for 11 months after that, and when he returned, the winning started again with a 1 ¾-length victory over optional claimers at Belmont on Oct. 17. He’s been training well ever since.

“It has been a while since he ran, but he’ll be fit enough,” McGaughey said. “He’s been over that track before. He seems to be doing as well now as he’s ever done.”

Performer drew post 1 and will be ridden by Joel Rosario, who has been aboard for all five wins.

Speaking of layoffs, King Guillermo comes into the Cigar Mile off a seven-month layoff since running second to Nadal in a division of the Arkansas Derby (G1). A fever knocked him out of the Kentucky Derby (G1). And he’s been training at trainer Juan Avila’s base at Gulfstream Park.

The 3-year-old winner of the Tampa Bay derby (G2) is owned by MLB veteran and five-time All-Star Victor Martinez.

“He’s good. He’s ready,” Avila said. “He’s getting ready to face that challenge. The mile will be good for him because he’s had seven months without a race.”

A five-horse field with Derby qualifying points of 10-4-2-1 to the first finishers. The 8-5 favorite is Known Agenda, trained by Todd Pletcher and ridden by John Velazquez. A son of Curlin, Known Agenda broke his maiden on second asking, taking a 1 1/8-mile at Aqueduct on Nov. 8.

Shug McGaughey, who trains Cigar Mile favorite Performer, has a shot in this one with Ten for Ten following a runner-up finish to Pickin’ Time (also entered in the Remsen) in the Nashua (G3) at the Big A on Nov. 7.

“We’re on the right track. He acts like he’s a pretty nice horse. It will be interesting seeing him go a mile and an eighth,’’ McGaughey said. “He’s quick so we’ll see how he does on Saturday. He should be able to place himself well.”

Jockey Jose Ortiz has the call and will leave from post 5.

Todd Pletcher has the top filly in this eight-horse field with 4-5 choice Malathaat, undefeated in two starts.

The Demoiselle offers Kentucky Oaks qualifying points of 10-4-2-1 to the first four finishers.

By Curlin and out of the Pletcher-trained Dreaming of Julia, Malathaat was purchased for $1.05 million at the Keeneland September Yearling Sale.

She won at 7 furlongs by 1 3/4-lengths in her debut, the by 7 ¾ lengths in the Tempted Stakes at a mile at the Big A. Added distance should help.

“You would think with her pedigree and the way she won going a mile that a stretch out should not be an issue,” Pletcher said. “She’s always trained like a quality filly that wants two turns, so we’re excited about stretching her out. This filly has been a star from day one basically.”

Yet another Todd Pletcher trainee, Nonna Madeline, is the 4-5 favorite off a record of 4-3-2 in 13 career starts.

The 4-year-old Candy Ride bay won in stakes company for the first time in the Summer Colony at 1 1/8 miles at Saratoga. Off-the-board in the Shuvee on Aug. 30, the filly rebounded with a nose win over Royal Flag in the 1 1/16-mile Lady’s Secret at Monmouth Park on Oct. 7.

Last out, she was third in the Turnback the Alarm (G3)

She enters from a prominent third in the nine-furlong Grade 3 Turnback the Alarm, won Royal Flag, at the Big A on Nov. 7.

“She shows up every time and runs hard every time, so I wouldn’t expect her to do any different this time,” Pletcher said.