Summer at the Spa: Saratoga Meet Features Travers on Aug. 8

The $1 million Travers Stakes finally has a date at the Spa – August 8.

Saratoga’s summer season was made official Friday when the New York Racing Association announced thoroughbred racing’s most prestigious meet will be held July 16-Sept. 7 and will feature 71 stakes worth $14.45 million. 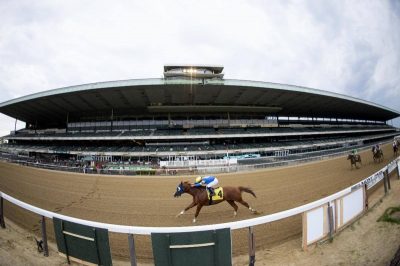 Although the dates for the meet have not been changed, the racing schedule has, with the Travers (G1) – the Mid-Summer Derby – three weeks earlier than usual.

“We’re thrilled to be racing at Saratoga this summer, and we thank Governor Andrew Cuomo for his support and the support of horsemen who have worked with us to navigate the many challenges,” NYRA President and CEO Dave O’Rourke said in a statement. “While this will be anything but a traditional Saratoga season, we hope to provide a semblance of normalcy for both the local community as well as racing fans across the country.”

The 1 ¼-mile Travers will be run seven weeks after Saturday’s $1 million Belmont Stakes (G1) on Saturday, making for an intriguing season for 3-year-olds on the Triple Crown trail.

The Belmont Stakes, with a field of 10 topped by 6-5 favorite Tiz the Law, is now the first leg of the Triple Crown rather than the final leg; the Kentucky Derby (G1) is rescheduled for Sept. 5, and the Preakness (G1) for Oct. 3.

The changes in dates for the Triple Crown races came about due to the coronavirus pandemic. Saratoga will open without spectators and the 40-day meet will follow health and safety guidelines from the local and state government.

The Travers anchors a day featuring five stakes; the others being the Grade 1 Ballerina Handicap (a Breeders’ Cup ‘Win and You’re In’ race for the BC Filly & Mare Sprint) and the Longines Test (G1), along with the Troy and Waya, a pair of Grade 3’s.

Opening day kicks off with the $100,000 Peter Pan for 3-year-olds moved from its traditional home at Belmont Park and the $100,000 Schuylerville for 2-year-old fillies.

After opening weekend, racing will be conducted five days a week, Wednesdays through Sundays.