Saudi Cup Betting Odds Benbatl: After a couple of warmup victories in Dubai, it looks as if 6-year-old Benbatl may be ready to take on some of the world’s top horses in the $20 million Saudi Cup on Saturday. 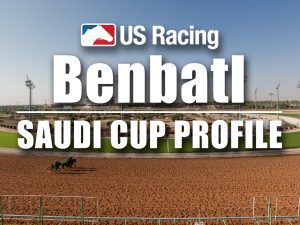 Let’s remember this will be just the second time in 21 horse racing career starts Benbatl runs on a dirt surface. He did win on dirt in his previous race, taking the 1 3/16th-mile Al Maktoum Challenge Rd 2 (G2) at Meydan on Feb. 6.

“Yes, Benbatl runs –Sheikh Mohammed was happy for him to go,” trainer Saeed bin Suroor said. “He won well on the dirt in Dubai, so we know that isn’t a problem. He’s been working well since, and he’s in good form. The race will be very tough, we know that, but we’re looking forward to seeing him run.”

Prior to his dirt win in which he stalked the pace and then took command in the stretch, he kicked off his 6-year-old campaign with a victory in the $250,000 Singspiel Stakes (G2) at Meydan on Jan. 9 (he won the race in 2018, too).

Through his first 19 starts, all on turf, Godolphin-owned Benbatl rolled up nine victories, three seconds and a third. Among his wins were three Grade 1’s in 2018 — the Dubai Turf, the Grosser Dallmayr-Preis in Germany and the Ladbrokes Stakes in Australia.

Following his 2018 season (five wins, two seconds in nine starts), he was given a much-earned rest, and returned this past September, winning the Joel Stakes (G2) at Newmarket before running 16th in the Queen Elizabeth II (G1) at Ascot over a very soft turf.

The 1 1/8-mile Saudi Cup looks like a Herculean task, even for an accomplished turf horse like Benbatl.

“Has three wins in four recent races, including victory over Gronkowski in dirt debut last time out … has never faced the likes of McKinzie and Maximum Security on the dirt.” – Noel Michaels

51-year-old trainer Saeed bin Suroor has been a longtime trainer for Goldphin, and has saddled more than 2,000 winners around the world…

His home base is Al Quoz Stables in Dubai from November-April, and then is based at Godolphins Sables at Newmarket the rest of the year…

The successful switch to dirt could turn into a financial bonzana is Benbatl performs well in the Saudi Cup since plans are being considered for a next start in either the Dubai World Cup or the Dubai Turf next month.

Register now for a betting account with UsRacing.com, and get your Saudi Cup Betting Odds Benbtl now!