Santa Anita Park became the latest racetrack to cancel live racing, and officials did so just before the start of Friday’s first race.

“In accordance with instructions received from Los Angeles County Health Department, Santa Anita Park will temporarily close for live racing effective immediately in response to the COVID-19 pandemic,’’ stated a news release issued Friday by Santa Anita, which is owned by The Stronach Group. 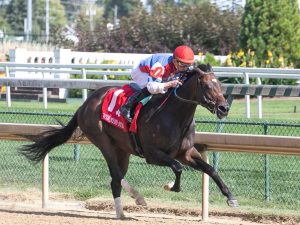 “At this time, there are no known cases of the COVID-19 at Santa Anita Park.’’

Santa Anita was one of three major racetracks in the United States still conducting live racing. The two remaining are Gulfstream Park, also owned by TSG, in Florida, and Oaklawn Park in Arkansas. Other tracks still racing include Golden Gate Fields in northern California, Tampa Bay Downs and Remington Park, all owned by TSG.

The announcement comes as the LA County health department announced Friday there was a total 1,456 cases of coronavirus, with 26 deaths, in LA County. In just the past 48 hours, the department said, there were 678 new cases.

With live racing canceled at Santa Anita for now, it’s likely the track will remain closed for a period that would also require cancellation of the Santa Anita Derby (G1), usually a key Kentucky Derby prep race, scheduled for April 4.

The statement from the track apologized for the late notice that affected Friday’s program, “but Santa Anita is abiding by the instructions issued this morning by the California Horse Racing Board to operate under the sanction of the local health authorities.”

The CHRB said Friday in a statement that it was “relying on state, county and local health authorities to determine whether horse racing is deemed essential for exemption from shelter-in-place orders issued by those authorities.”

According to a report in the Los Angeles Times, which obtained a memo from an environmental health specialist from the health department, it was determined the track should no longer conduct live racing.
“After review by our Department, live racing of the horses has been deemed a non-essential operation,” the Times reported the memo said. “Horse racing may not continue per the Health Officer Order.”

There was no direct reference to live racing being a non-essential business in the health department press release.

“It is imperative that everyone, collectively, take action to slow the spread of COVID-19,’’ the department said in a news release. “County and City Parks may remain open for passive recreational activities. Persons using the parks are required to practice social distancing at all times. The Order is effective immediately and will continue through April 19.’’

“It is crucial that we limit access to non-essential places where crowds have been gathering,” said Dr. Barbara Ferrer, the Los Angeles County Public Health Director.

Santa Anita said there are more than 1,700 horse stabled at the track who require daily care provided by 750 backstretch workers, most living on-site “and have been operating under stringent new measures for protection aligned with the best guidance from local and international health and government authorities on COVID-19.

“We will continue to work with authorities to familiarize them with the protocols which have been put in place to protect the health and safety of those who work with the horses and the horses themselves,’’ Santa Anita’s statement continued, noting that there have been no spectators – only essential personnel – at the track since March 12.

In recent days Turfway Park in Kentucky closed, and Aqueduct in New York canceled live racing. Keeneland canceled its entire spring meet, and most every sporting event around the world has either been suspended or canceled, including the 2020 Olympics in Tokyo (postponed until 2021) and more recently the Indianapolis 500 (rescheduled from May to August).