Lauren and Rene Wolcott, the owners and breeder of Sadler’s Joy at their Woodslane Farm in Virginia, caught on quickly after making a couple of regretful mistakes.

Tonalist, the first colt produced at the property they established in 2006 after switching from the steeplechase world to the thoroughbred business, was put up for auction as a yearling. Tony, as he was affectionately known in trainer Christophe Clement’s barn, went on to win the 2014 Belmont Stakes (G1), the Jockey Club Gold Cup (G1) in successive years (2104-15), and the 2015 Cigar Mile (G1) while bringing home checks totaling $3.647 million for Robert S. Evans, who bought the colt privately after Tonalist didn’t meet his reserve.

“We breed to race. We usually keep the fillies and sell the colts. Tonalist was our first colt and he was a lesson for us,” Lauren Wolcott said to a reporter as she stood outside the stall of Sadler’s Joy days before he finished fourth in the 2017 Breeders’ Cup Turf (G1).

“We learned our lesson. From the time he was foaled we had every intention of keeping this colt.”

That decision proved to be shrewd for the Wolcotts, whose original goal was to buy and race fillies with fancy pedigrees and subsequently retire the best of them to forge a broodmare band with the hallmark of high quality over quantity.

Sadler’s Joy is a son of superb turf sire Kitten’s Joy and Woodslane’s beautifully bred mare Dynaire by Dynaformer. The Grade 1 winner gets his name from Sadler’s Wells as he is inbred 3 x 4 to the European champion miler and the 14-time record-setting European leading sire and broodmare sire and three-time North American leading broodmare sire.

In a career spanning four seasons, the Tom Albertrani-trained Sadler’s Joy has a record of 6-4-7 in 25 outings and has bankrolled $2,261,360. He is the Wolcott’s only graded stakes winner, but it’s been a long time between drinks, as the saying goes.

Although he has hit the board seven times while racing against Grade 1 and Grade 2 company in 10 efforts since the end of March 2018, the 6-year-old chestnut horse hasn’t gotten to the winner’s circle since taking the Mac Diarmada (G2) at Gulfstream Park at the start of March that year.

His connections are hoping for a reversal of fortune when he departs the starting gate with Hall of Famer Javier Castellano at the controls as the 8-5 morning line favorite in the field of 11 for the $200,000 Red Smith Handicap (G3) at 1 3/8 miles on Aqueduct’s inner turf course on Saturday.

Sadler’s Joy is a legitimate Grade 1 horse. He took third in the 2018 Breeders’ Cup Turf (G1) behind European superstar fillies Enable — just named the 2019 Cartier Award winner as Horse of the Year — and Magical.

This time out he should benefit from the class drop after running third in the Joe Hirsch Turf Classic (G1) at Belmont in October, which followed a runner-up finish by a neck in the Sword Dancer (G1) at Saratoga in August. In July, he wound up sixth in a blanket finish at Saratoga in the Bowling Green (G2) in what was a nightmare trip.

“For him, this race looks like it will give him a little class relief from the horses he’s been running against, for sure,’’ Albertrani said by phone from his New York base. “We just hope he gets to run his race and that he has a good trip. He’s always right there in every one of his races, so as always, it’s just a matter of getting a good trip for him. With his running style, he’s a horse that likes to come from far behind so in this type of race, you always have to find a way to save some ground. Otherwise, the difference between winning and losing is usually the margin you’ve lost trying to go around horses.”

Along with the class drop, the almost seven-week break since his last race should be of benefit as well, especially since he’s being asked to stay the 1 3/8 miles. Sadler’s Joy has won twice in nine tries at the distance and won his only race, an optional claiming race dating back three years, on the Aqueduct lawn.

“He’s doing super. I gave him a little extra time off after the Joe Hirsch Classic because I thought that he was a little quieter than is his normal self,’’ Albertrani said. “We skipped the Breeders’ Cup this year because we just needed a little extra time to get him back to feeling sharp again and he’s feeling great and doing good. He does well when he’s a little fresher so we’re looking forward to seeing him run well this weekend. Hopefully, we can get it done.”

Sadler’s Joy has been a joy for his connections. Albertrani likened him to Twilight Eclipse, the multiple graded stakes-winning earner of more than $2 million whom he led over to run in four editions of the Breeders’ Cup Turf from 2013-16 and was a world record holder  at 1 1/2 miles (any surface) when winning the 2013 Pan American Stakes (G2) in 2:22.63 on the Gulfstream Park grass.

“He has a special place in my heart. Between him and Twilight Eclipse, they’re the older horses who stayed in the barn with me for a long time. It’s really nice having these old horses around. Twilight stayed with me until he was eight or nine,” he said.

But the 6-year-old Sadler’s Joy and his trainer won’t enjoy the same longevity.

“We’re probably, hopefully, looking at running him in Dubai in the Sheema Classic (G1) (in late March 2020) and that should be the end of his career. Then he’ll go on to his next stage as a stallion,” he said. 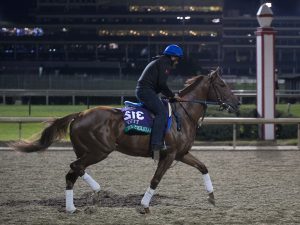 Sadler’s Joy’s opponents in the Red Smith, which is named in honor of the Pulitzer Prize-winning journalist who influenced generations of sports writers, include a talented pair from the barn of Clement, and incidentally, one of them happens to be owned by Robert Evans.

Evans’ Have At It won the 2018 Hill Prince (G2) and now returns to stakes company for the first time in four starts.

“He’s been training well and has been sound,” Clement, who legs up Manny Franco, said. “It makes sense to try him at a mile and three-eighths. We’ve been trying to get him back to his best form all year and I think we’re finally there.”

Clement’s other entry is the France-bred Petit Fils, which translates as “grandson” in French. Owned by West Point Thoroughbreds, he makes his North American debut after going 6-4-0 in 13 starts in his native country and will be getting Lasix for the first time.

“He’s a new horse that we got from Europe,” Clement said. “He’s a stayer, without a doubt. He’s training well for his (North American) debut. Joel Rosario has been working him and will be aboard.”

Another deserving of respect is six-time graded stakes winner Tiz a Slam, who looks for his fourth victory in the last five starts. Trained by American and Canadian Hall of Famer Roger Attfield, the Chiefswood Stables’ color bearer has won five graded stakes since turning 4.

“He’s a big horse and he’s just mature now,” Attfield said. “A lot of those bigger horses don’t mature until the end of their four-year-old year and I think he’s fully matured now. We looked after him well in his early life, so he’s a very sound horse.