Road to the Kentucky Oaks: Rachel Alexandra Draws Field of 10

The Rachel Alexandra Stakes (GII) for 3-year-old fillies was first contested in 1982 and originally named the Davona Dale Stakes after the champion filly and Hall of Famer Davona Dale, who raced in New Orleans in the late 1970s and won the Kentucky Oaks (GI), Black-Eyed Susan Stakes (GI) and Acorn Stakes (GI) for owner/breeder Calumet Farm and trainer John Veitch. 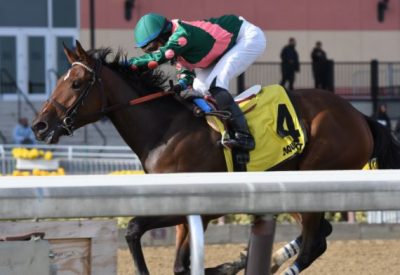 In 2001, Fair Grounds renamed the race for another champion, the Mike Pegram-owned and Bob Baffert-trained Silverbulletday, who won the Davona Dale in 1999 en route to capturing the Kentucky Oaks and Black-Eyed Susan Stakes as well, and was inducted into racing’s Hall of Fame in 2009.

A year after Silverbulletday’s induction into the most coveted club in racing, the race got another name change, this time to honor the 2009 Horse of the Year Rachel Alexandra, who went on to win the Kentucky Oaks and beat the boys in the Preakness Stakes (GI). She was also inducted into the Hall of Fame in her first year of eligibility in 2016.

When the race was renamed for Rachel Alexandra, the Tiffany Lass Stakes, which is traditionally run in January as a prep for this event, was renamed to continue on the name of Silverbulletday.

In addition to the two winners the race has been named for, other notables to have crossed the wire first in the 1 1/16-mile prep for the Fair Grounds Oaks (GI) in five weeks includes Prospectors Delite, the dam of Grade 1 winner and leading sire Mineshaft; fellow notable broodmare Take Charge Lady; and champions Indian Blessing and Untapable. A year ago, Kentucky Oaks heroine and Horse of the Year finalist Monomoy was victorious here before logging her incredible 2018 season.

This year’s Rachel Alexandra offers 50 points to the winner (and 20-10-5 through fourth) toward making the gate for the May 3 Kentucky Oaks (GI), the first race so far this year with a hefty points offering.

Molto Bella – Italian phrase that translates to “very beautiful,” this $100,000 daughter of Violence ships from Tampa Bay Downs after a 6 ½-length romp in the Gasparilla Stakes. Her only start at this distance produced a fourth, but she did have trouble that day, and she’s been training well for Ian Wilkes, who has yet to win this race. Jockey Julien Leparoux, who rides for the first time, won this race in 2011 aboard Kathmanblu.

Street Band – Trainer Larry Jones saddled I’m a Chatterbox to win here in 2015 and sends out his homebred daughter of Istan off a nose allowance/optional claiming win here a month ago. She’s definitely a good work horse, likes Fair Grounds and, on Saturday, gets the services of jockey Sophie Doyle looking for her first Risen Star win.

Serengeti Empress – This 19-length Pocahontas Stakes (GIII) winner faltered in the Breeders’ Cup Juvenile Fillies (GI), but is back after a brief respite. Tom Amoss, who won this race with Playcaller in 1994 and Venus Valentine in 2016, seeks his third win in this race and jockey James Graham is still winless. She hasn’t raced in more than three months, so fitness certainly is a question.

Positive Spirit – is another off a layoff, as this daughter of Pioneerof the Nile hasn’t raced since her 10-length romp in the Demoiselle Stakes (GII) at Aqueduct on Dec. 1. Trainer Rodolphe Brisset, with his first Rachel Alexandra starter, has kept this girl fit at Payson Park with a steady stream of works and brings Manny Franco in to ride looking for his first Rachel Alexandra win.

Liora – Coffeepot Stables, trainer Wayne Catalano and jockey Channing Hill teamed up to win this race two years ago with Farrell and are back with this $175,000 daughter of Candy Ride looking to rebound off a very troubled fourth-place finish in the Silverbulletday Stakes last month. She won the Golden Rod Stakes (GII) at Churchill at this distance in November and figures strongly with a cleaner trip.

Oxy Lady – This Calumet Farm homebred became trainer Jack Sisterson’s first stakes winner and graded winner when she won the Tempted Stakes (GIII) at Aqueduct in November. She was well-beaten in the Los Alamitos Starlet (GI) last out, but has been training well for this return. She has had some nice works over this surface, too. Jockey Adam Beschizza has yet to win a Rachel Alexandra.

Bell’s The One – This Neil Pessin-trained daughter of Majesticperfection enters her first graded stakes undefeated with three wins, including in the Letellier Memorial two months ago. Jockey Florent Geroux, who is Monomoy Girl’s regular rider and won with her here last year and also was aboard I’m a Chatterbox, is back aboard.

Eres Tu – This daughter of Malibu Moon is back after a bumpy second in the Silverbulletday Stakes last out. Hall of Fame trainer Steve Asmussen has won this race a record four times (Summerly, 2005; Appealing Zophie, 2007; War Echo, 2009; and Untapable, 2014) and sends out this well-bred filly in her first graded attempt. Ricardo Santana Jr. seeks his first Rachel Alexandra win.

Needs Supervision – The winner of the Silverbulletday last out, this $55,000 daughter of Paynter is riding a three-race win streak. Trainer Jeremiah O’Dwyer has one win this year — with this filly — and brings this gal in ready in an effort to saddle his second winner this year. She has been training well since her last.

Chasing Yesterday – This sister to Triple Crown winner American Pharoah did not make the trip from California and will be withdrawn.