Two announcements from Churchill Downs on Thursday: one real, one virtual.

First, reality: The reopening of the Churchill Downs stable area has been further delayed, this time until at least May 5. The stable area, closed since Dec. 31, was scheduled to reopen March 17 but has been held up in response to the coronavirus pandemic. The spring meet was set to start April 25, but has been postponed, with a new date based on when the OK is given to open the stable areas. 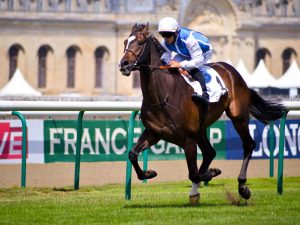 Image by Jennyfer Rubio from Pixabay

Second, virtual: NBC will televise a three-hour ‘Kentucky Derby at Home Party,’ on May 2 (the traditional first Saturday in May derby date), featuring what Churchill Downs is calling: “The Kentucky Derby: Triple Crown Showdown, a computer-simulated version of a race under the historic Twin Spires of Churchill Downs.

“The virtual race, created by Inspired Entertainment, will feature the 13 past Triple Crown winners and use data algorithms including historical handicapping information about each horse, which helps to determine the probability of their potential finishing positions.”

Churchill Downs says it hopes to raise $2 million for COVID-19 emergency relief efforts. The Derby has been rescheduled to Sept. 5. The news release said beginning April 30, fans can visit www.KentuckyDerby.com to pick the winner of the virtual race and make a donation if they choose.

Anyone who select the winning horse will be entered to win the ultimate Kentucky Derby 146 VIP Experience. Churchill Downs says it will match up to $1 million of donations.

The funds will be directed to Team Kentucky Fund and Direct Relief, with a “small percentage” going to the R.E.I.N. Fund (Relief for Equine Industry Needs)

“For many fans around the country, the first Saturday in May has become a part of their family’s yearly traditions,” said Kevin Flanery, president of Churchill Downs.

“While we eagerly look forward to the 146th Kentucky Derby this year on the first Saturday in September, we will celebrate the annual excitement of our traditional date with our fans and community by offering ways for us to join together for a great cause. Our fans will be captivated by the realistic view of the virtual race and we can debate, as we do each year, our favorite to win.”

The show is 3 p.m.-6 p.m. ET, and comes just before the running of $1 million Arkansas Derby at Oaklawn Park. The Arkansas Derby, usually a key Kentucky Derby prep, was rescheduled from April 11 to May 2, and will showcase many of the top 3-year-olds, including leading Kentucky Derby contenders Nadal, Charlatan and Wells Bayou.

As for the reopening of the stable areas, Flanery said, “We remain hopeful that our horsemen can safely return to work here in Kentucky sooner rather than later.

Horse racing is a unique agricultural business and serves as the prime economic driver for thousands of individuals in the Commonwealth. … We’re working hard to reopen in a responsible and safe environment that will satisfy our public officials.”