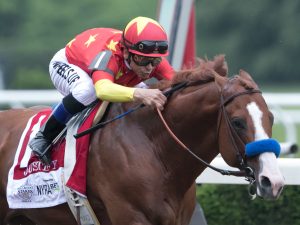 It’s been a few days since the New York Times reported that 2018 Triple Crown winner Justify had failed a drug test weeks before the Kentucky Derby and under California racing rules at the time shouldn’t have been able to run in the Derby.

California Horse Racing Board equine medical director Rick Arthur has said the amount of scopolamine was “miniscule” in Justify’s blood and recommended at the time that the case not be prosecuted.

Dr. Rick Sams, who ran the Kentucky Horse Racing Commission’s drug lab from 2011-18, said in the Times story that scopolamine can act as a bronchodilator to clear a horse’s airway, making the horse more efficient. He also told the Times the amount of the banned substance (300 nanograms per milliliter) found in Justify was excessive. “I think it has to come from intentional intervention,” he told the Times.

Once again, the racing industry finds itself swirling in controversy. A few months ago, 30 horses died at Santa Anita from Dec. 30-June 22, with some calling for California to simply ban racing.

Here’s a sampling of reaction after the publication of the story:

“I unequivocally reject any implication that Scopolamine was ever intentionally administered to Justify, or any of my horses. Test results indicating trace amounts of the drug were undoubtedly the result of environmental contamination caused by the presence of jimsonweed in feed, a naturally growing substance in areas where hay and straw are produced in California. In addition, I had no input into, or influence on, the decisions made by the California Horse Racing Board. – Hall of Fame trainer Bob Baffert

“Until media reports surfaced Wednesday night, neither Churchill Downs nor the Kentucky Horse Racing Commission had knowledge of any potential positive tests that may have emanated from California in advance of the 2018 Kentucky Derby.

We do know that all pre- and post-race tests for 2018 Kentucky Derby participants came back clean, including Justify. In advance of our race each year, the Kentucky Horse Racing Commission conducts pre-race out-of-competition testing for every Kentucky Derby starter and all starters’ results were clean. After the race, the top finishers are tested for a myriad of banned substances and the results for all were clean.” — Kevin Flanery, Churchill Downs Racetrack President

“Justify, as with every horse who raced in the 2018 Preakness Stakes at Pimlico Race Course in Baltimore MD, was subjected  to  pre-race  drug       testing by the Maryland Racing  Commission. Justify, as the winner of the 143rd Preakness, along with several other horses who competed, also received extensive post-race testing by that same body. The Maryland Jockey Club was informed that all of those tests came back negative for any illicit substance or for the overages of any prohibited medication.” – Maryland Jockey Club

Until last 48 hours, I have never felt the impact of #fakenews. @joedrape  cooked up a story, went on @ESPNRadio & impacted many negatively. It really hit home when I saw Bob Baffert receive a call from his son Bode…John8:31 “u shall kno the truth, & the truth shall set u free.” – Elliott Walden @WinStarCEO on Twitter

“No trainer would ever administer scopolamine to a horse.  It has a depressant effect and would do anything but enhance the performance of a horse. There is zero scientific evidence to suggest that scopolamine has any performance-enhancing properties.” – Baffert attorney Craig Robertson III in released letter sent to New York Times

“It is most unfortunate that the correct decision by the CHRB to not pursue action due to what was clearly a case of environmental contamination has been badly mischaracterized. All possible tests and procedures and investigations were followed by the CHRB Equine Medical Director and senior staff, which led to the overwhelming evidence that Justify, along with six other horses in four different barns at Santa Anita, ingested scopolamine from Jimson Weed which was present in the hay that had been delivered to the barns.

“Furthermore, under ARCI guidelines scopolamine is a class 4c substance, which would not trigger disqualification or re-distribution of a purse. Under CHRB Rule 1843.2 classifications are based on the ARCI guidelines, unless specifically modified by the Board. The Board never modified that designation.

“Beyond that, the whole premise of the story is false on its face. As stated in the story, the split sample that confirmed the presence of scopolamine did not come back from the independent lab until three days after the Kentucky Derby.

“California law mandates that test results must remain confidential unless and until a complaint is filed and a complaint can only be filed at the end of an investigative process. — Chuck Winner, former chairman of the CHRB

“It would have been a complete miscarriage of justice for the CHRB to have taken action against Justify or Baffert, knowing full well that the horse was poisoned by an environmental contaminate and not injected with a substance.” – Winner