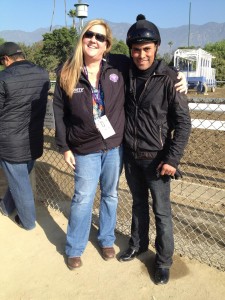 Margaret Ransom at the track.

For the second year in a row, US Racing’s Margaret Ransom has received honorable mention in the Feature/Writing category of the media Eclipse Awards. Ransom was recognized for her two-part story on the late four-time Eclipse Award winning jockey Garrett Gomez entitled “The Pact: Garrett Gomez’s Greatest Legacy”.

Last year, Ransom was honored for “The Shocking Untold Story of Maria Borrell,” which won the Stan Bergstein Writing Award and was instrumental in getting a bill — Kentucky HB 200 — passed. Dubbed the “Borell Law,” HB 200 allows courts in the Bluegrass State to order a person convicted of animal cruelty in equine cases to pay restitution for the upkeep of a horse(s) involved in the offense and, more importantly, terminate the offender’s ownership rights to the horse involved in the case.

Ransom said she got the idea for the Garrett Gomez story after volunteering at the California Retirement Management Account (CARMA) OTTB show, which Pam Gomez, Garrett Gomez’s wife, also attended.

“The Dubai World Cup was on and we all watched it on a computer in the show office,” Ransom said. “Pam was in there with [daughter] Amanda and she kind of sadly remembered traveling there with Garrett. And I thought: You know, I don’t remember anyone interviewing [Garrett Gomez’s] widow after he died.

“I knew their marriage was basically over — everyone did,” Ransom continued. “But I know he spent the better part of his life with her. She was so sad that day and I knew she had a story to tell. So I asked her. She was reluctant, but decided if her story helped one person it was worth opening up the doors to criticism and opening up the wounds.”

As for being recognized by the Eclipse Award committee for the second consecutive year, Ransom says it “means everything.”

“I spent my whole adult life in racing because I love it just about more than anything else. While I’m proud of everything I’ve done, writing about the things that are important to me and — I hope — meaningful to the industry fills my bucket. To have the industry agree with another [Eclipse Award] recognition is an amazing honor.”

But lest people think that she will be spending 2018 reading her press clippings, Ransom has a busy New Year planned.

“I will continue to write things that ultimately benefit this game and the horses I love and continue to work on stories I find to be meaningful,” she said.

“I have some new ideas and great subjects I think people will want to know more about.”

The Eclipse Awards are named after the great 18th-century racehorse and foundation sire Eclipse, who began racing at age five and was undefeated in 18 starts, including eight walkovers. Eclipse sired the winners of 344 races, including three Epsom Derbies. The Eclipse Awards are bestowed upon horses and individuals whose outstanding achievements in North America have earned them the title of Champion in their respective categories. Those awards are voted by NTRA, Daily Racing Form and the National Turf Writers and Broadcasters (NTWAB). Eclipse Awards also are given to recognize members of the media for outstanding coverage of Thoroughbred racing.