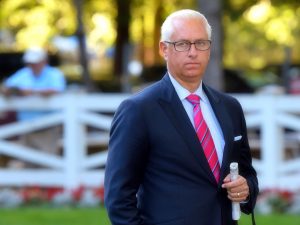 The way things have been going for trainer Todd Pletcher, maybe this is the year he can pull off his first Preakness victory when he sends out maiden winner Unbridled Honor.

A longshot for sure in Saturday’s second leg of the Triple Crown, but Unbridled Honor seems to be headed closer to the winner’s circle in a big race.

He ran fourth in the Tampa Bay Derby (G2), then second behind King Fury in the Lexington Stakes (G3) on April 10 and did not run in the Derby. Pletcher, however, sent out four other horses, none of them having hit the board.

A Pletcher runner in the Preakness is rare, since the two-time Derby winner prefers to give his runners time off after such a big race. Unbridled Honor will be his 10 Preakness starter and his eighth Preakness.

Pletcher also was elected to racing’s Hall of Fame recently in his first year of eligibility. He won the Florida Derby (G1) with Known Agenda, the Wood Memorial (G2) with 72-1 longshot Bourbonic, and the Kentucky Oaks (G1) with unbeaten Malathaat.

Unbridled Honor will be ridden by Luis Saez and leave from post 8. The son of Honor Code worked 4 furlongs in 49.75 seconds at Belmont Park on Saturday (May 8).

“It looks like all systems are go, assuming that everything is in good order (coming out of the breeze),’’ Pletcher said.

“He ran well in the Lexington, I thought he ran sneaky good at Tampa,” Pletcher said last week. “I trained him at Churchill, and I thought he breezed very well. He’s a horse I think will appreciate some pace in the race, which, I think the way this is going to shape up, we’re going to see a contested pace.”

Notes: Pletcher is winless with nine starters over seven runnings of the Preakness. Impeachment, third in 2000, was his best finish … Pletcher’s Derby winners, Super Saver in 2010 and Always Dreaming in 2017 both ran in the Preakness and both finished eighth … Saez will be riding in his second Preakness; he finished second with Bravazo in 2018. Saez is the regular rider for Essential Quality, the Derby favorite who ran fourth and is not in the Preakness.