It’s all about freakiness in a Preakness with a weakness. 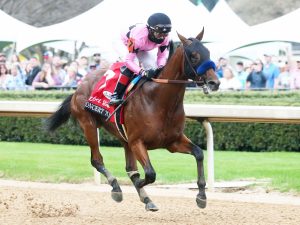 The race’s slogan is “A Jewel To Remember.” Well, we’ll never forget the year the Kentucky Derby winner had a postrace drug positive, and his world-famous trainer went home to California to dodge a media tsunami. Bob Baffert always enjoyed the relaxed atmosphere at Pimlico following the Derby’s frenzy. Not this time.

This week we learned more than we ever wanted to know about betamethasone and picograms. In a normal year — wait, we don’t have them anymore — we’d be wondering whether Baffert would be going for a record third Triple Crown on June 5 at Belmont Park. Not only will Medina Spirit be disqualified if his split sample from the Derby also comes up positive, he’ll be barred from Saturday’s Preakness if prerace drug tests detect anything amiss.

If not for these disturbing distractions, we’d be talking about the remarkably weak field for Preakness 146. Medina Spirit, the 9-5 morning-line favorite, is its only Grade 1 winner, and the inquiry sign is blinking on that. Baffert’s other entry, Concert Tour, is the 5-2 second choice by default, and he’s winless beyond 1 1/16 miles. Besides Medina Spirit, only 30-1 shot Ram comes in off a victory, and that was in a non-winners-of-1 allowance.

Much has been made of the Derby’s exciting finish, with the first four within a length and a head. The last time that happened in America’s Race was 1966. Problem: When horses are bunched at the wire, especially at 1 1/4 miles, it means nobody is a standout, not even the gritty winner.

Front-runner Medina Spirit refused to be passed when the pack swarmed him in mid-stretch. Full credit for that, but the pace scenario fell into his lap when the main speed, Rock Your World, was eliminated leaving the gate. Midnight Bourbon, who was expected to try for the front, was bumped early, hung wide on the turns and plodded home sixth. Essential Quality, who ran fourth, fell short by only a length and a head despite traffic problems.

“I think he was the best horse,” Cox said. “People can say what they want, but he was beaten a length and ran 68 feet farther than the winner. He had a little bit of trouble at the start, he was in chase mode pretty much the whole way. We just didn’t have the racing luck.”

I agree, and I didn’t pick or bet on Essential Quality. I would have played him in the Preakness, but he’s not there, and neither is Cox’s runner-up, Mandaloun, or third-place Hot Rod Charlie. Too bad because any of them would have made it a lot more compelling.

Do the 8 non-Baffert horses have a chance in the Preakness?

As for the eight entrants not trained by Baffert, I immediately tossed out Ram (2-for-9), Keepmeinmind (1-for-7) and Unbridled Honor (1-for-5). Rombauer is 0-for-3 on a fast track, and Japan shipper France Go de Ina is a mystery horse.

At 5-1, “wise guy horse” Midnight Bourbon is an underlay. Plus: His record of 7-for-8 in the money makes him a must-use underneath in exotics. Minus: He’s dropped five of his last six, losing ground late every time. He won his only stakes by leading throughout, and I can’t visualize him outrunning both Bafferts early on. Too bad Midnight Bourbon can’t finish because his stalking style would be ideal in this field.

That leaves Chad Brown’s pair of Crowded Trade and Risk Taking, who will draw money because of their trainer’s name and the slew of no-hopers. Risk Taking is a stayer with two wins at 1 1/8 miles, and I’m willing to forgive his seventh-place flop in the Wood Memorial. Maybe I shouldn’t.

I broke even Derby weekend but dropped about $150 on the big race. I don’t intend to put more than $25 on the Preakness, where I’m going with Concert Tour. I’m not confident, but I have to pick somebody.

He’s turned in three excellent workouts since his third-place dud at 1-5 odds in the Arkansas Derby. Maybe he’s sitting on a career top. Or not. Maybe Concert Tour will clear the field from post 10 and never get caught. Or maybe he doesn’t have to. In his second start, he stalked in the 7-furlong San Vicente and won.

Medina Spirit is 0-for-3 in stakes when he didn’t go wire to wire, so expect him to lead and Concert Tour to stalk. Sounds logical, but plans have a way of vaporizing when the gates open.

The vibe around Medina Spirit couldn’t be worse, and vibes are important. I also think he’ll feel the effects of a hard race in Louisville. If you didn’t have him at 12-1, don’t take him at 9-5 or less.

Perhaps the racing gods have a twisted sense of humor and will let Baffert get his record eighth Preakness with his “other horse.” Can’t you see him accepting congratulations from his couch in California as his many haters cringe?