It’s still a long way off before the Preakness (G1), but we can expect a whole bunch of “new shooters” primed to take on Kentucky Derby (G1) winner Medina Spirit on May 15 at Pimlico Race Course.

One of them will be Rombauer, winner of the El Camino Real Derby in February, third in the Blue Grass (G2), and whose owners decided to pass on the Derby in favor of the Preakness.

Rombauer had 34 Derby-qualifying points, more than enough to run in the 1 ¼-mile Derby. A 3-year-old who likes to rally from off the pace, works this weekend at Santa Anita and if all goes well, he’ll be shipped to Baltimore early next week.

“He’s done everything and made a nice little progression from 2 to 3,” trainer Michael McCarthy said. “He’s put on a little weight. He’s a horse that takes pretty good care of himself, so he’s been pretty easy that way.”

Rombauer, owned by John and Diane Fradkin, is listed at 20-1 in the opening line at BUSR. 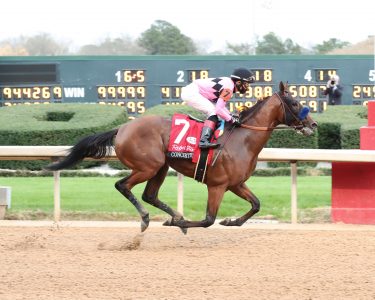 Medina Spirit, with Hall of Fame rider John Velazquez aboard, is the 4-1 favorite according to BUSR. For now, Preakness possible Concert Tour (also trained by Baffert) is listed at 5-1 by BUSR, with Essential Quality (fourth as the favorite in the Derby) at 6-1, although a decision is pending on his Preakness status.

“Medina Spirit has to be the favorite for the Preakness on the back of his Kentucky Derby win, but a tentative fav!” said BUSR spokesperson James Ross. “If the race turns into a scrap, Baffert’s entry could land his second Triple Crown victory in May. Essential Quality was disappointing at Churchill Downs but has to remain a possibility at a tempting 6-1.”

Brad Cox, who trains Essential Quality as well as Derby runner-up Mandaloun (a Preakness possible as well), could also go with Caddo River, who did not run in the Derby.

“One of the biggest curveballs in this race is the great Bob Baffert’s Concert Tour who sat out the Derby but had Caddo River firmly in his pocket in the Rebel Stakes in March,’’ said Ross. “One thing’s for sure, it’s not a big price that the Baffert clinches his eighth Preakness Stakes winner — and we’re expecting to see a big rush of money on all of his runners!”

Other horses who did not run in the Derby being pointed to the 1 3/16-mile Preakness include King Fury (a late Derby scratch due to a fever), Japan-based France Go De Ina, Crowded Trade, Tarantino, and Unbridled Honor.

Baffert’s last two Preakness winners were American Pharoah in 2015 and Justify 2018, both of whom won the Derby two weeks prior and then went on to take the Belmont Stakes and become Triple Crown champions.

As for Medina Spirit, he may jog by midweek, but for now all is well.

“We’ll see how the weather is. It’s hard to give them too many days off when we’re coming right around,’’ said Baffert’s assistant Jimmy Barnes, who is with the colt at Churchill Downs. “But all systems look good right now. Everything is good.”

One other Derby runner, Midnight Bourbon (sixth), is a possibility.

“We’re considering running in the Preakness, but we will obviously defer to his training,” said Hall of Fame trainer Steve Asmussen who conditions Midnight Bourbon. “We’ll keep discussions open.”