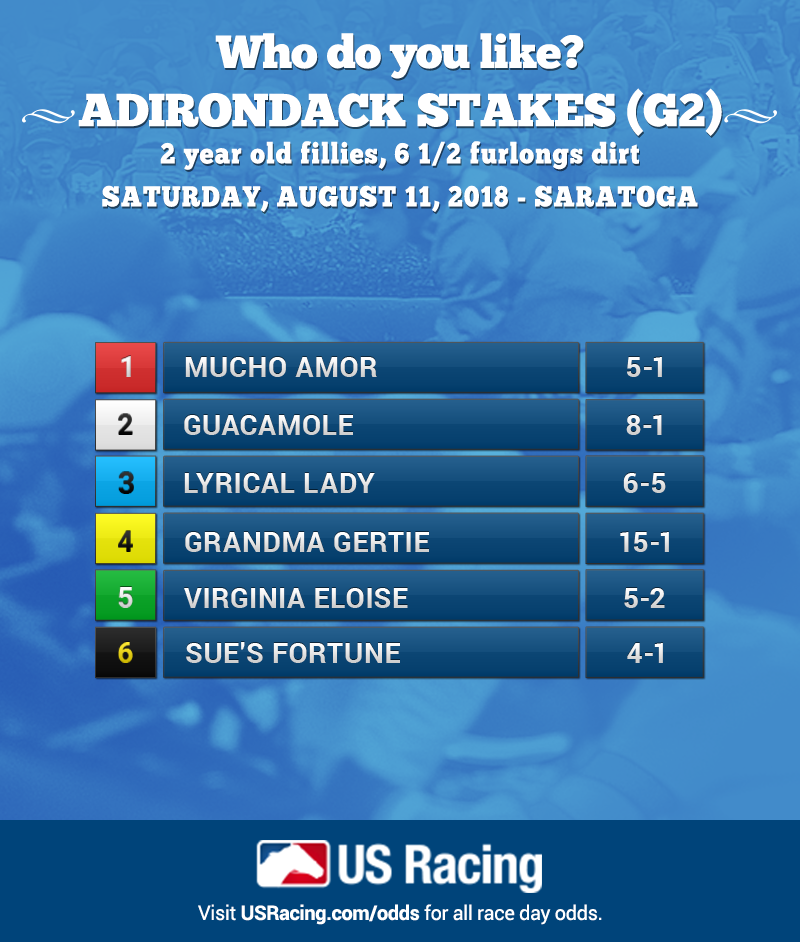 Trainer Todd Pletcher, who has won five previous editions of the $200,000 Adirondack Stakes (G2) at Saratoga (including the last two), will send out a pair of talented fillies in search of his sixth winner in the 6 ½-furlong feature for juvenile fillies.

Four other talented fillies are expected to line up in the event, which serves as the traditional prep for the Sept. 1 Spinaway Stakes (G1), which is also a Breeders’ Cup Challenge “Win and You’re In” race.

The Adirondack Stakes has been contested since 1901 and is named for the nearby Adirondack Mountains. Some of the more notable names to have won the race over the past nearly 120 years include My Miss Aurelia, Octave, Folklore, You, Flat Fleet Feet, Storm Song, Sacahuista, Buzz My Bell and Busher.

Virginia Eloise for St. Elias Stable and MeB Racing Stable’s Virginia Eloise was victorious in her debut on July 4 at Belmont by a widening five lengths. The daughter of Curlin has posted a series of nice workouts since, including two over Saratoga’s Oklahoma track, which impressed her conditioner.

“She’s training very well,” Pletcher said. “We’re pleased with the professionalism she showed in her debut, and she’s continued to show us that in the mornings in preparation for this race.”

The filly, who also seems to prefer to be on the front end, at least from the one start, will be ridden by Hall-of-Famer Javier Castellano, taking over for fellow Hall-of-Famer John Velazquez, who will be at Arlington Park for that track’s International Festival of Racing, and the pair will break from post five.

Fortune Farm’s Sue’s Fortune, a New York-bred by Jump Start, wowed the competition when breaking her maiden by 8 ½ lengths on July 5 at Belmont Park, earning a field-high Brisnet speed figure of 89. The Jeremiah Englehart trainee has been working well since her debut, both at Belmont and over the Oklahoma training track, and while this will be a step up to more than just stakes company (she will be in open company for the first time as well), her conditioner believes her to be more than up for the task.

“She came out of her first race in good shape,” Englehart said. “We were planning on looking at the Adirondack first, thinking it might come up lighter than the Seeking the Ante [on Friday, Aug. 24]. Last year, a New York-bred won it [Pure Silver], so we’re going to try to repeat it this year and go from there.”

Sue’s Fortune drew the far outside and Junior Alvarado will be back aboard.

Phoenix Thoroughbreds’ Lyrical Lady is trained by Hall of Fame member Steve Asmussen and the $625,000 daughter of More Than Ready makes her stakes debut after breaking her maiden by 5 ¾ lengths three weeks ago. She owns the second-highest Brisnet Speed figure of 88 and will also likely be part of the early pace scenario under Ricardo Santanta, Jr. and she shouldn’t have too much trouble making the lead if she breaks well from post position three.

Repole Stable’s Guacamole will look to break her maiden in the Adirondack after a narrow defeat over a very muddy Saratoga track on July 26, in which she came from off the pace and was just shy of getting up in time. She is one who will probably love the hot pace to sit behind and, with the probable dry track, may improve enough to pick up at least a graded placing.

After her debut, the daughter of Flat Out earned her right to try stakes company, according to her trainer.

“Any time you’re fortunate to win a prestigious race such as the Adirondack with a well-bred filly, it means a lot to her residual value and to the owners,” Pletcher said. “Hopefully, we can do it again.”

Mucho Amor, who comes from the always-strong juvenile contingent of Wesley Ward, broke her maiden at first asking 3 ½ months ago at Keeneland. She’s been training well since, including a bullet half-mile in :47 2/5 last week and, if she’s fit, she’ll be tough.

Grandma Gertie looked good breaking her maiden at Parx last time out, but her speed figures show she’s a notch below this level and this is an awfully big jump for the Pennsylvania-bred daughter of Uptowncharleybrown.