Old Lukas A 180 From The Lukas of Old

His longshot Ram finished last, more than 36 lengths behind, which didn’t ruin the Preakness (G1) for an 80-something who’s won it six times. All-time great D. Wayne Lukas was just happy to be there at his favorite Triple Crown event.

“The hospitality for the horsemen at Pimlico is outstanding, and it’s so much more relaxing compared to Derby week,” Lukas said. “My grandson, Brady, is coming here with his girlfriend, and we’ll have some crab cakes. Then we’ll just go down and run the horse and enjoy it. I hope he’ll run well, but I don’t expect him to win.”

Although Lukas was no factor in the big race, his hands were all over Preakness weekend. Michael McCarthy, a former assistant trainer to Todd Pletcher, who is a former assistant to Lukas, won it with 11-1 shot Rombauer. Mike Maker, who spent 10 years (1993-2003) under Lukas, had the best two days of his career, sweeping the Pimlico Special (G3) and the Black-Eyed Susan (G2) on Friday before taking two more graded stakes the next day.

A few hours before the Preakness, NBC interviewed Lukas, Pletcher and McCarthy in Pimlico’s decrepit old grandstand. Professionally, they are grandfather, son and grandson.

Pletcher was 22 in 1989 when he began a seven-year apprenticeship in Lukas’ barn before going out on his own. In August he’ll join his mentor in the Hall of Fame. Pletcher surpassed him in 2014 as the all-time leader in earnings and has five Triple Crown victories, nine behind Lukas. He credits “The Coach” for providing the template for success – “a crash course where you get to learn things in a couple years that might take 20 years to learn.” 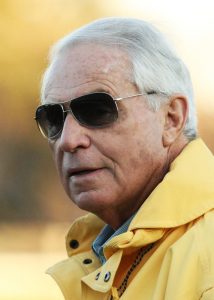 Lukas calls Pletcher “my adopted son,” and Todd passed on his knowledge to McCarthy during their seven years (2007-14) together. “Everything I do sort of channels what we did when I worked there,” McCarthy said. “I always try to refer to something he would do.”

McCarthy ended the NBC interview with something the low-key Pletcher would never do.

“You’re standing among a living legend and an icon of the sport, and I didn’t want to leave there flat-footed,” McCarthy said. “So, I thought I’d go ahead and leave them with a line. I told them I had something I’d surprise them both with.”

That line was “Keep an eye on me,” meaning Rombauer. It was a bold comment from somebody making his Triple Crown debut with a colt who was 0-for-3 on dirt. When Rombauer drew off by 3 1/2 lengths, McCarthy looked like a prophet. “Things just worked out today,” he said.

Longshot Unbridled Honor never got involved and came in sixth, dropping Pletcher to 0-for-10 in one of the few major races in which he’s been shut out.

“Strange to believe that I’ve won something he hasn’t,” McCarthy said. “I’m sure that won’t last for long. It means the world to me.”

Pletcher was the first to congratulate him, shaking hands and bear-hugging. “I’m very, very happy for him,” he said. “He deserved it. I was rooting for him if we couldn’t do it.”

Another branch of the Team Lukas training tree is Kiaran McLaughlin, who in 2006 trained Horse of the Year Invasor and Belmont Stakes (G1) winner Jazil. Last year he transitioned to being a jockey agent for standout Luis Saez. Like Pletcher, McLaughlin reveres Lukas, calling him “a great coach, a great teacher and a great horseman.”

Lukas is very proud of “my guys.” In 2013, he told America’s Best Racing: “People ask me from time to time about the trainers who came through our program. I always say we started with an exceptional group of guys and we took it to another level.

“I think I helped them with organization and how to manage the help, but they all had that intuitive awareness of what to do with a horse before they met me. I knew they would go out on their own, and what they did was never any surprise to me.”

They helped Lukas run his far-flung empire way back in the Eighties and Nineties when he was racing’s undisputed heavyweight champion. From 1983-97 he led the nation in earnings every year but 1993. Starting with the 1994 Preakness, he won an unprecedented six consecutive Triple Crown races. He has a record 20 Breeders’ Cup trophies, trained a record 25 Eclipse Award champions and won four Eclipses as top trainer. He revolutionized the sport by establishing stables all over the country and flying horses to major stakes.

He’s also the only person in the thoroughbred and quarter horse Halls of Fame. Not many know that Lukas trained 23 world champion quarter horses before switching full-time to thoroughbreds in 1974.

“Wayne’s resume is unparalleled,” Pletcher said. “Nobody else comes close.”

Inevitably, there was plenty of pain along the way, and 1993 brought Lukas professional and personal nightmares. He was vilified in the media, accused of running an unsound horse, after Union City’s fatal breakdown in the Preakness. “I feel that I was unfairly criticized,” he told Sports Illustrated. “It was like a pack of wolves on a wounded deer.”

He also was having serious financial problems, and Lukas, the embodiment of positive thinking, became depressed. An emotional intervention with his only child, Jeff, and some of Wayne’s closest friends helped him bounce back.

That December brought heartbreaking misfortune, Lukas’ lifetime low. Jeff, his right-hand man and a brilliant horseman in his own right, suffered a traumatic brain injury when the 2-year-old colt Tabasco Cat ran him over on the Santa Anita backstretch. Jeff, then 36, beat long odds by surviving but was never the same. He wasn’t well enough to return to the sport he loved, and he died of an apparent heart attack in 2016. He was 58.

(Lukas soldiered on after the accident, training Tabasco Cat to victories in the Preakness and Belmont. He said it made no sense to punish the horse for what had happened.)

Lukas had a cardiac episode in 2015, and last summer he lost about 25 pounds during a life-threatening bout with COVID-19, but he’s still on his pony at the track every morning. “It’s what he lives for,” Pletcher said.

Lukas’ small stable has only eight wins in 95 starts this year, according to Equibase. Long gone are those seven-figure yearlings who swept Grade 1 stakes after dominating their debuts. Ram needed eight starts before winning a maiden claimer. But winning no longer is all that matters to Lukas. He’s done it all, and few ever had a greater influence on racing. Besides all those records, his world-class successors are his legacy. In a hundred years, the ambitious farm boy from tiny Antigo, Wisconsin, will still be remembered.

Once the bold, brash King of the World, now he’s a low-key underdog and an elder statesman. NBC showed him relaxing on a chair, taking in the scene at Pimlico’s stakes barn.

“I think at this stage of my career — 85 and turning 86 in a couple of months — I’m at a point where I don’t feel any pressure,” he said. “I feel like I have a really good fan base, and I feel like I get more love than I did when I first came to Pimlico with Codex in 1980. I get that warm and fuzzy feeling here especially.”

Retirement? That’s for other people. Lukas likes to say he wants to die with his boots on, fall off the pony, and that they “can just harrow me under” the track. During Derby week, he said he thinks he has “five or six good years left in me.”

That old man Lukas, he just keeps rolling along.