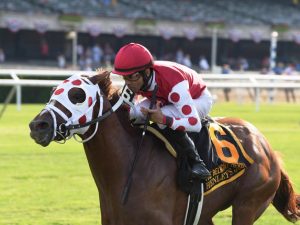 The “Turf Trinity” has been a holy terror for handicappers so far. And that’s a good thing, an antidote to the steady stream of short fields — and frequently shorter payoffs — in stakes races.

The Turf Trinity is the innovative series introduced this season by the New York Racing Association, creating an in-house Triple Crown for 3-year-old turf horses from North America and Europe.

It concludes Saturday at Belmont Park with the $1 million Jockey Club Derby Invitational at 1 ½ miles, a Breeders’ Cup Challenge race guaranteeing the winner a berth in the Longines Turf.

Will chalk players finally have their way? Or will the long shot pattern continue?

The series began with Henley’s Joy stalking the pace before rallying for a 20-1 upset in the Belmont Derby. Next stop was upstate New York for the Saratoga Derby Invitational where A Thread of Blue led every step to reward his backers at 13-1.

Henley’s Joy and A Thread of Blue are back to face seven rivals, including three Europeans all making their U.S. debuts.

Two factors, distance and footing, complicate the handicapping. This is the longest of the three races, a possible challenge for the American horses and a clear advantage for the European runners who routinely run 12 or more furlongs.

Then there is the condition of the turf course. It should be lush, having recovered while the NYRA action shifted to Saratoga. But it could be soft, with showers in the forecast for Friday. That might be an additional edge for the Euros.

That leads this handicapper to Spanish Mission, who has raced exclusively in England for trainer David Simcock. Regular rider Jamie Spencer will be aboard the Kentucky-bred colt who arrives in top form. Two starts back, Spanish Mission was the dominant winner of the Bahrain Trophy at Newmarket at 1 5/8 miles.

He cut back a furlong last outing and missed by only a neck in the Qatar Gordon at Goodwood.

By no means are we slighting local heroes A Tread of Blue or Henley’s Joy. Both figure prominently.

The main drawback in selecting either one is value. That train likely left the station now that they’ve established their credentials in the series. 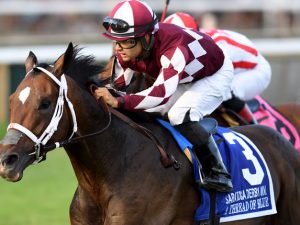 A Thread of Blue – Photo by Chelsea Durand / NYRA

A Thread of Blue drew the rail, an ideal starting slot given his pacesetting style. Luis Saez rides for trainer Kiaran McLaughlin, who harbors a few reservations about this spot.

“We’re not too sure about the distance,” McLaughlin said. “He prefers it firm so hopefully it doesn’t get too soft. He’s trained great coming into it and he’s run very well.”

Henley’s Joy and Digital Age are the only two to run in all three legs of Turf Trinity.

After his Belmont Derby win, Henley’s Joy rallied for fifth at Saratoga. He joins Kadar as an uncoupled pair from the Mike Maker barn.

Tone Broke has done most of his recent racing north of the border, capturing two thirds of the Canadian Triple Crown.

The Jockey Club Derby is the focal point of NBC’s live coverage Saturday from 4:30-6 pm ET.

Europe will be well represented there by the talented trio of Wonderment, Love So Deep and Edisa.

Lady Prancealot, a late-running third most recently in the Del Mar Oaks (G1),  could be the best domestic hope from the California-based team of trainer Richard Baltas and jockey Joe Talamo.