Moment in Time: Pharoah Phrenzy at the Spa

The preceding century-and-a-half or so had seen more than its share of champion thoroughbreds, which is not surprising since champion thoroughbreds have been congregating in Saratoga Springs, New York ever since former boxing champ, future congressman and peripatetic gambler John Morrissey decided back in 1863 it would be a swell place to run some horse races.

Open the scroll of famous horses to have graced Saratoga Race Course and it likely would stretch from Oklahoma (the training track, not the state) to the Big Red Spring (named for Man o’War) and then some. A few highlights: Ruthless, the great filly who won the 1867 editions of both the Belmont and the Travers; Hindoo, winner of the 1881 Kentucky Derby and Travers; the aforementioned Man o’War, who in 1920 returned to the scene of his only career loss to win the Travers; Whirlaway, the only Triple Crown winner to annex the Travers, in 1941; Native Dancer, the “Gray Ghost” who rebounded from his stunning upset in the Derby to win the Preakness, Belmont and Travers … are you seeing a pattern yet? 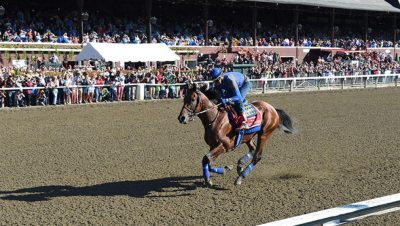 Dial back five years from now and picture in your mind the delirium that reigned at the conclusion of the 2015 Belmont Stakes, when American Pharoah atoned for a 37-year interregnum and became the first horse to win the Triple Crown since Affirmed in 1978.

Wrote Joe Clancy of ST Publishing: “Over the small divider to the reserved seats, people reveled in the moment. They were old, young, tall, short; some wore fascinators and seersucker; others sported flip-flops and cut-off shorts. But they were there, a melting pot of history witnesses clutching $2 tickets they’d never cash.”

That evening, a trip from California back to New York for the “Mid-Summer Derby” seemed like the longest of long shots. Jim Barnes, trainer Bob Baffert’s assistant, just shook his head. “Never happen,” he said.

But it did. And the Spa was ready.

“Pharoah Phrenzy” (I am not making this up) had been the theme ever since owner Ahmed Zayat announced American Pharoah would, indeed, be coming to Saratoga. Travers Day promptly morphed into “Pharoahtoga Day” (I am not making that up, either), complete with banners, signs and T-shirts galore. The New York Racing Association, which had capped Travers Day –uh, Pharoahtoga Day — attendance at 50,000, let it be known that those not fortunate enough to have a ticket would be able to watch the handsome colt gallop around the main track on the eve of the race.

When the gates opened at 7 a.m. that Friday (fans had been lined up for hours), the mad dash was not for the coveted picnic tables but to the grandstand. The seats were filled within minutes, and the rail was five- and six-deep a full hour before American Pharoah was to take to the track. The crowd was estimated at 15,000-plus, and it let out a tremendous cheer as the champ, led by Barnes aboard the stable pony Smokey, jogged past the grandstand. The noise swelled again as exercise rider Georgie Alvarez turned back and let him out a notch to lope past the fans once more.

It wasn’t apparent to the fans, but Alvarez was wearing a GoPro camera on his helmet in the hopes that Pharoah’s gallop could be shared again and again and viewed by those who were not able to be there. Indeed, the six-minute video gives the viewer an amazing insight as to what it’s like to be on the back of an extraordinary racehorse, even in just a routine morning gallop, with the exception of all those people applauding and cheering as he galloped by for the final time.

Pharoah’s phans (sorry, I couldn’t help it) would cheer him again some 33 hours later, when he returned from his stunning defeat in the 1 ¼-mile race to Keen Ice, the horse who had finished second to him earlier in August in the Haskell. Once again, Baffert was moved by the devotion and admiration the colt always drew, and in the ensuring years – even after garnering his second Triple Crown with Justify in 2018 – he recalled that glorious Friday morning in upstate New York, when all things seemed possible with a horse that made everyone around him feel good.

Of all the great moments Baffert experienced during American Pharoah’s Triple Crown season, he always talks about the day before the Travers: “I just couldn’t believe how many people showed up to see him go out to the track. It was an incredible experience I’ll never forget.”