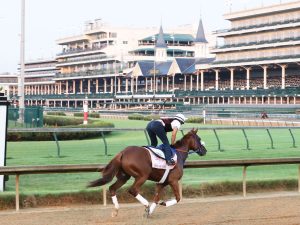 Swiss Skydiver put an exclamation point on this year’s Triple Crown finale with her game and gutsy win over Authentic in the Preakness (G1) on Saturday.

The filly’s victory was a terrific triumph for the tough-as-nails horse and Robby Albarado, the veteran jockey whose career has been on a roller-coaster ride, showing he still has game in the big moments.

In a larger context, racing was the biggest winner by pulling together to stage the 2020 Covid Crown.

It took a lot of compromising, schedule juggling, altering of racing conditions, a willingness on the part of the industry to follow health and safety protocols and the support of fans who couldn’t attend the races in person but still bet their money remotely.

It all seemed like Mission Impossible back in the Spring when the coronavirus spread across the nation as sports and businesses shut down. Here we are in October with a completed three-race series.

And they were three fascinating contests.

Tiz the Law affirmed his early-season standing as the division leader with a decisive win in the slimmed down Belmont Stakes (G1), reduced to 1 1/8 miles from its traditional 1 ½ miles.

In this topsy turvy season, the Belmont was the leadoff event of the series instead of the conclusion.

Tiz the Law looked like a steamroller cruising into the Kentucky Derby (G1) following a crushing win in the Travers Stakes (G1).

But there was Bob Baffert, Mr. Triple Crown, waiting in Louisville on the first Saturday in September to spring the Derby upset with Authentic at 8-1.

With Tiz the Law skipping the Preakness to prep for the Breeders’ Cup Classic (G1), Authentic looked primed to claim two-thirds of the Covid Crown.

Then he met his match in Swiss Skydiver. Authentic had the entire Pimlico stretch to run her down but came up short.

“That’s a good filly,” Baffert said. “He had every chance to get by her.”

In one of the numerous twists to this season, the Preakness was a Breeders’ Cup “Win and You’re In” qualifier for the Classic.

The connections of Swiss Skydiver now have the option of the Classic or the Distaff (G1).

“I would say right now we would probably lean towards the older fillies and mares,” McPeek said in the immediate aftermath of the Preakness. “But nothing is set in stone.”

Truer words were never spoken during this unpredictable year.

We now move on to the Breeders’ Cup at Keeneland on Nov. 6-7, the final chapter of this unprecedented season. Let’s hope the high standards set by the 3-year-olds during the Covid Crown permeate the two-day championships.

For those taking a longer-range, and an optimistic view, we are only 209 days away from the Kentucky Derby. Here’s hoping we can circle May 1, 2021 at Churchill Downs on our calendars, and keep to that date.

Trainer Ken McPeek was still in awe of Swiss Skydiver’s victory over Authentic the morning after she became the sixth filly to win the Preakness.

“I should probably retire today, because I don’t think it can get higher than this. I really don’t. She’s beat so many odds,’’ said McPeek. “I’m beyond proud of her, proud of Robby [Albarado] and everyone who’s handled her. It’s been a real team effort. I have some unbelievable people who work for me that help handle the details.”

The filly came out of the race in fine shape, and is headed back to Churchill Downs on Monday.

In the Derby, Authentic held off Tiz the Law’s challenge in the stretch; in the Preakness, Swiss Skydiver did the same to Authentic.

“After all of that, I’m still surprised he just could not get by her,” Baffert said Sunday, adding that both Authentic and Thousand Words came out of the race in good order. “She just was game. It was one of those things where I said, ‘All right, come on, get by her.’ They were running, they were leaving the field. It was, ‘Wow, did that really just happen?’’’