Maximum Security is ‘King of the World’ After Winning Saudi Cup 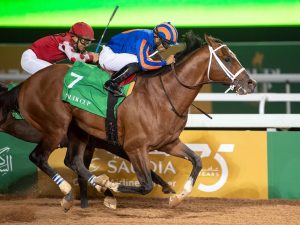 To become king of the world, Maximum Security had to fly through a third of it. Even for a horse who has finished first in all but one of his 10 races, it’s never been easy. Last summer he narrowly escaped surgery for colic. He was downgraded for skipping the Preakness, Belmont, Travers and Breeders’ Cup. And what could he ever do that could make up for a historic disqualification in the sport’s most coveted race?

On Saturday night in a faraway land, Maximum Security showed his trademark brilliance and grit in the richest event in the history of horse racing, the $20 million Saudi Cup in Riyadh, Saudi Arabia. More than 8,000 miles from Churchill Downs, his unhappy place for eternity, the disqualified Kentucky Derby winner proved he’s the best horse on the planet.

The favorite’s three-quarter length win over the brilliant mare Midnight Bisou handed $10 million to owners Gary and Mary West and the Coolmore group, which bought a 50 percent interest in December. For trainer Jason Servis, it was worth a lot more than his $1 million share of the purse.

“Really, that horse has got a lot of heart, he is some horse, he is amazing,” Servis said. “It’s got to be some vindication.

“I am a bit superstitious and didn’t want to overtalk him, but I was really feeling good the last three days. There was just a presence about him.”

In an ironic twist, the only Derby winner ever taken down for interference had to endure an eventful trip thanks to very aggressive race riding by Irad Ortiz, Jr. on Mucho Gusto. On the only turn of the 1 1/8-mile race at King Abdulaziz Racecourse, front-runner Mucho Gusto forced Maximum Security at least five-wide, then floated him and Luis Saez even farther out at the top of the stretch.

Saez stayed cool, shifting paths inside Mucho Gusto before surging past in midstretch as Ortiz moved left to try to hinder his momentum. Mucho Gusto faded to fourth, a nose behind Benbatl.

“I was a little upset with Irad Ortiz,” Servis said. “He kept bearing me out down the backside and carried me out on the turn. Then when ‘Max’ dropped inside, he came down on me, but that is a story for another day.”

Earlier Saturday, Nick Luck of Fox Sports1 asked the affable, folksy Servis about the long-term effects of the Derby DQ.

“You know what, it hasn’t been that bad,” Servis said. “I don’t know why, but it just hasn’t been that hard for me to handle. I’m busy, I have a lot of horses. My wife says to me, ‘How can you be so calm about it?’ It just rolls off of me. I’m just movin’ on.”

Being voted the champion 3-year-old in a landslide eased the sting.

“When he won the Eclipse, it meant a lot, because he got DQ’d in the Derby,’’ Servis said. “I don’t want to say whether he should have come down or shouldn’t have come down, but he was the best horse that day.”

No one could argue that, and the stewards’ controversial decision made Maximum Security a sympathetic figure. Servis called his fans’ response “unbelievable. We got two-page letters that made you cry, somebody painted me a tie, and we’re still getting stuff. They felt really bad that he was disqualified.”

Servis took the pain with class and humor, telling Luck: “Most people, after a while, they’ll forget who won the Derby, but they’ll always remember who got disqualified.”

For any other horse, that would be its only reason for a place in history, but not for Maximum Security.

As race caller Richard Hoiles said seconds after the finish: “The horse that we remember for a race he lost, will now be remembered for a race he won!”