Bring on Essential Quality and Knicks Go, Max Player is ready to take on the top-rated horses in two months in the $6 million Breeders’ Cup Classic (G1). 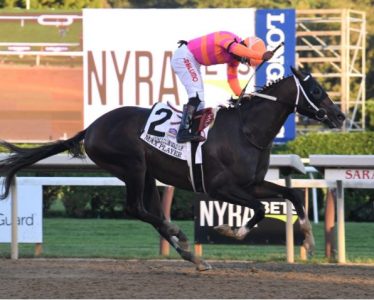 Hall of Fame trainer Steve Asmussen was delighted with the outcome. He now has a remarkable 4-for-4 record in the Jockey Club Gold Cup, one of America’s most prestigious races run for the first time at the Spa.

Max Player won the Suburban (G2) coming into the 1 ¼-mile JCGC, and in both wins a huge change in the horse took place – right from the start. And now he’s won two in a row after six straight losses.

“We weren’t away from the gate fast. He wasn’t even in the race; wasn’t even making up ground against quality horses spotting him that much,’’ said Asmussen of his colt’s earlier woes. “The last two races I think the difference has been he’s been in position to be as effective as possible.”

He sure was in this one. Sitting comfortable in second place in the field of six, just behind the leader, Max Player made his winning move around the turn. And when the field hit the stretch, he had taken the lead from even-money favorite Forza Di Oro and cruised past the wire in 2:02.49.

Max Player, owned by George Hall and SportBLX Thoroughbreds, will make his next start in the BC Classic at Del Mar, according to Asmussen. The 63-day gap from this race until the 1 ¼-mile Classic – against likely favorites Essential Quality (Belmont and Travers winner and Knicks Go (Whitney Stakes winner).

“Max likes to be fresh,’’ said Asmussen. “I talked to the owner (George Hall) and stuff, and I think his next stop will be the Breeders’ Cup Classic.”

An all-fees berth into the BC Classic was up for grabs in the JCGC, but Max Player had already earned a spot with his victory in the Suburban, also part of the BC “Win and You’re In’’ challenge series.

Here’s a recap of the other Saturday stakes at the Spa: 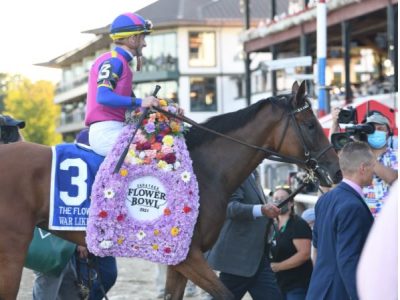 War Like Goddess ($2.80) surged to the lead around the final turn and posted a 2 ¼-length victory over Great Island to earn an all-fees paid berth into the Breeders’ Cup Filly & Mare Turf (G1) on Nov. 6.

A winner in 6-of-7 career starts for Hall of Fame trainer Bill Mott, the 4-year-old daughter of English Channel came into the race off a win in the Glens Falls (G2) on Aug. 7.

“She’s a classy filly. You can do whatever you want, and she’ll still give you that punch in the end,’’ said winning jockey Julien Leparoux. “It’s nice. It’s a sign of the good ones, for sure.”

Sent off at 10-1, Cilla ($23.40) took the lead from 9-10 favorite Souper Sensational in the stretch, then brushed against her rival before prevailing by a half-length following a steward’s inquiry. 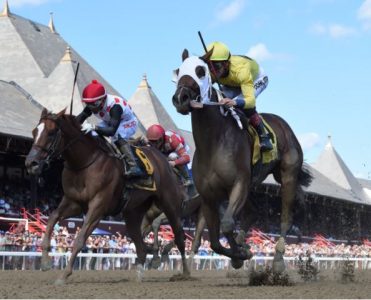 Cilla at the Prioress Stakes – Photo Courtesy of NYRA

Cilla, ridden by Tyler Gaffalione, took a winning step up in class after the Louisiana bred had posted wins in the Mademoiselle in June at Evangeline Downs and the Blue Sparkler at Monmouth.

Admittedly, there was light contact between the fillies in the stretch, but even Mark Casse, who trains Souper Sensational, agreed with the decision to let the result stand.

“I think they made the right decision,’’ said Casse. “There was some contact, but we couldn’t get by her. She just beat us today.”

Winning time for the 6 furlongs was 1:10.05. Brett Brinkman is the trainer, but he does not have license in New York, so the listed trainer was Charlton Baker. 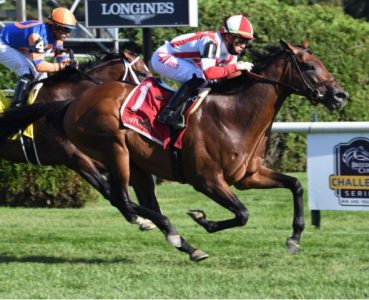 Public Sector at the Saranac – Photo Courtesy of Janet Garaguso

Make that two in a row at the Spa for Public Sector.

The 3-year-old colt overtook Never Surprised in the final furlong for a one-length victory in the 1 1/16-mile Saranac on the turf.

“I got a perfect trip,” winning rider Irad Ortiz, Jr. said. “We broke well from the one-hole and two horses had speed, so I sat off of them. When it was time to roll, I asked my horse, and he was loaded. When he switched leads, he gave me a good turn-of-foot. He responded really well.”