Since the 50th running of the Kentucky Derby in 1924, Churchill Downs has annually presented a gold trophy to the winning owner. History is unclear if a trophy was presented in 1875 to the winner of the first Kentucky Derby, and trophy presentations were sporadically made in following years. Finally, in 1924, legendary Churchill Downs President Col. Matt J. Winn commissioned a standard design to be developed for the “Golden Anniversary” of the Derby. 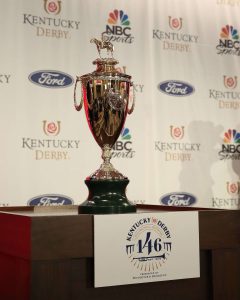 Outside of the jeweled embellishments that were added to note special Kentucky Derby anniversaries in 1949 (75th), 1974 (100th), and 1999 (125th), only one change has been made to the original design — for the 125th Kentucky Derby in 1999, Churchill Downs officials decided to defer to racing lore and change the direction of the decorative horseshoe displayed on the 14-karat gold trophy. The horseshoe, fashioned from 18-karat gold, had pointed downward on each of the trophies since 1924. To commemorate Kentucky Derby 125, the change was made and the horseshoe was turned 180 degrees so that its ends pointed up because racing lore suggests that if the horseshoe is turned down all the luck will run out. The trophy now annually incorporates the horseshoe with the ends pointing up.

How is the Kentucky Derby Trophy?

The Kentucky Derby trophy, which is topped by an 18-karat gold horse and rider, includes horseshoe shaped handles, is 22 inches tall and weighs 67 ounces, excluding its jade base. The entire trophy is handcrafted with the exception of the horse and rider that are both cast from a mold. To complete the trophy by April, craftsmen begin the process during November of the previous year and work approximately 2,000 hours.

The trophy is believed to be the only solid gold trophy that is annually awarded the winner of a major American sporting event. Additionally, three smaller sterling silver replica trophies are awarded to the winning jockey, trainer and breeder of the Kentucky Derby.

In accordance with an old-established Derby custom, the tall, stately Derby trophy will be presented to the winning owner by Kentucky’s chief executive, the governor of the Commonwealth of Kentucky, Andy Beshear. The presentation will follow the race around 7 p.m. ET.

Once engraved, another presentation of the Kentucky Derby trophies to the winning owner, breeder, trainer and jockey is tentatively scheduled between races at Churchill Downs on Stephen Foster Day. Because of the Covid-19 pandemic and Derby delay it’s unclear when this year that presentation will happen.