The Breeders’ Cup was conceived in the early 1980s as a as a year-end championship for North American thoroughbred racing. Longtime owner and breeder John R. Gaines presented the idea to the industry during the 1982 Kentucky Derby Festival and after initially receiving some pushback, the concept was accepted and the first event was held in 1984 at Hollywood Park. 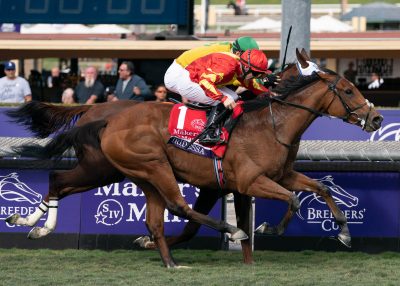 Based on stallion eligibility nominations and foal payments, in 1983 initially 1,083 stallions, representing more than $10.9 million in fees were nominated to the Breeders’ Cup program. That number has grown significantly.

In North America, stallion owners/managers/farms pay an annual nomination fee which is equal to the stallion’s advertised stud fee, plus an additional amount if the stallion has more than 50 foals that year. European stallion nominations is the equivalent to 50 percent of their stud fee, while South American stallions are 25 percent.

Also, breeders must pay a one-time nomination fee per foal by October 15 of the year foaled.

By the end of 1983, Breeders’ Cup had signed an exclusive broadcasting deal with NBC Sports to cover multiple years of the then seven-race, single-day event. Some of the initial corporate sponsorship for the inaugural event included Mobil Oil Corporation, De Beers Consolidated Mines Ltd., Chrysler Corporation (Chrysler-Plymouth and Michelob (Anheuser-Busch, Inc.).

The inaugural Breeders’ Cup was held with 64,254 in attendance at Hollywood Park. Chief’s Crown won the first Breeders’ Cup race, the Breeders’ Cup Juvenile, while and longshot Wild Again won the Breeders’ Cup Classic in a thrilling stretch duel with Slew o’ Gold and Gate Dancer and after surviving a lengthy inquiry into bumping in the stretch drive. The Classic purse was $3 million,