Arkansas Derby Day is here – three weeks after originally scheduled and with a whole different perspective as Oaklawn Park is ready to host a loaded 14-race card on closing day. 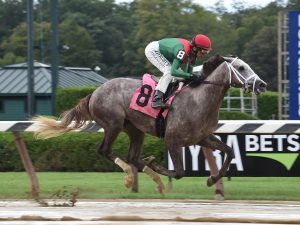 With no Kentucky Derby on the first Saturday in May (rescheduled for Sept. 5 due to the coronavirus pandemic), the Oaklawn card might just be the best day of racing and wagering of the day of the year.

Here’s a look at my late Pick 4 ticket. Take a shot, and best of luck.

Kicking off the late Pick 4, this is by far the weaker of the two divisions — good news for several contenders who desperately need Kentucky Derby qualifying points (100-40-20-10 for the first four finishers in each division).

That being said, the rest of the field may end up running for second the dominant horse here is #1 CHARLATAN. Trained by Bob Baffert, Charlatan makes his stakes debut, but is 2-for-2, including a five-length maiden win at 6 furlongs at Santa Anita, followed by a 10-length allowance optional claiming win at Santa Anita when stretched out to one mile.

Both featured huge speed figures. It would be a lot easier to poke holes in this horse if he were trained by anyone else than Baffert, but Baffert already has had success with a late-blooming 3-year-olds like this including Justify, who went on to win the Triple Crown.

Baffert also tends to own the Oaklawn 3-year-old stakes races year after year, including Nadal’s win in this year’s Rebel and two prior wins in the Arkansas Derby in 2012 with Bodemeister and in 2015 with Triple Crown champion American Pharoah.

Our ticket will single Charlatan. If he loses, we can come right back in the Pick 3 in the next race with the rest of the selections listed below. If there is another horse that might warrant including on your Pick 4 tickets, it probably should be #4 GOUVERNEUR MORRIS for trainer Todd Pletcher.

He finished second in last fall’s Breeders’ Futurity (G1) at Keeneland, and then showed promise when winning his 3-year-old debut two races ago at Tampa. He disappointed, however, with a fourth-place when failing to deliver the expected improvement in the Florida Derby last time. We can’t blame those who give him one more chance.

Thanks to the single on Charlatan, we can use plenty of contenders in this race and still end up with an affordable ticket. Let’s go with four horses, starting with #4 MR FREEZE (6-1), who seems like the horse to beat despite his odds.

He has quietly developed into a serious threat in the handicap division for Dale Romans based on his second in the Pegasus World Cup (G1) followed by a win in the Gulfstream Mile (G2) where he earned a 107 Beyer.

The morning line favorite at 4-1 is #7 COMBATANT, and he deserves respect here for trainer John Sadler based on his win last out in the Santa Anita Handicap (G1) on March 7. #2 TROPHY CHASER (12-1) arrives to Oaklawn in career-best form after earning back-to-back wins with 100+ Beyers in a Gulfstream allowance followed by a victory in the Challenger (G3) at Tampa last time out.

Finally, #9 TACITUS (9-2) returns from his fifth-place finish in the Saudi Cup in his 2020 debut on the heels of a 2019 sophomore campaign where he won or placed in five Grade 1 or Grade 2 races. 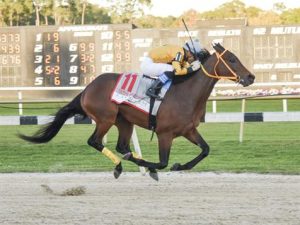 In the much tougher of the divisions, with several highly-accomplished horses, we have two logical standouts – Rebel winner #5 NADAL and Tampa Bay Derby (G2) winner #4 KING GUILLERMO.

With respect to Louisiana Derby (G2) winner Wells Bayou, Breeders’ Cup Juvenile (G1) winner Storm the Court, and Kentucky Jockey Club (G2) and Southwest Stakes (G3) winner Silver Prospector and others, you may be able to get off cheap in the Pick 4 and lock up this race by using the two logical favorites. King Guillermo ran a monster race with a big speed figure to win at Tampa, but ill appears to be unrightfully overlooked.

Nadal, meanwhile, appears to be the real deal after dueling for the lead on a blazing pace in the Rebel and fending off waves of challengers with enough left in the tank hold on for the win. Baffert also trains Nadal.

The final race of the Oaklawn season is a doozy – three turns, 1 ¾ miles, and a 14-horse field sure to give handicappers fits, and Pick 4 players a headache. The favorite is #5 CARLOS SIXES (4-1), and he does seem like the legitimate horse to beat based on his three wins and a place in four four outings at the 2020 Oaklawn meet. The big question will be the distance, as in, who will handle it and who won’t?

There are two horses with this kind of long-distance racing experience, and both should be included on your tickets. The defending winner of the same corresponding race last season is #11 THE ROUGE DIESEL (15-1), a two-time winner at this distance. #10 WILD ABOUT YOU (10-1) is also a proven marathon performer at 1 ½ miles who owns a victory in his only career outing at 1 ¾ miles.

Beyond that, no less than three other horses should be played, starting with #12 SHE MIGHT TELL (10-1), who owns a win at the meet and then closed well for second last time out. If you can afford it, also use #7 WICKETS WAY (8-1), who could benefit from this distance, and #8 GHOSTLY WHO (12-1), who scored a 1 1/8-mile win here two races ago against a tough field. If you’re worried about all of these outside posts, keep in mind the horses run the entire length of the backstretch out of a chute before coming onto the first turn.