Looks like it’s time to get back on the long and winding road to the Kentucky Derby, still four months away but inching ever so closer to post time.

Up until last Saturday, not much had changed in the world of 3-year-olds. A bunch of timed workouts here, lots of outside-the-box thinking there, and tons of hoping that when Derby Day comes around owners and trainers will still have their contenders in top form.

All we can do is watch and wait, though, as federal, state and local officials carefully attempt to re-open businesses under strict rules due to the coronavirus pandemic that has killed more than 75,000 people in the United States. 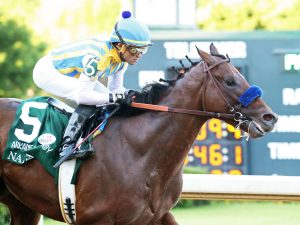 While tracks are beginning to set re-opening dates, and there will be a reshuffling of Derby preps in the coming days/weeks, five-time Derby winner Bob Baffert has given the racing public plenty to chew on: seven 3-year-olds with Derby qualifying points; three of them unbeaten, and all three among the top four in my latest Kentucky Derby Top 10.

I’ve moved Baffert’s Nadal up to No. 1 over Tiz the Law based on the what-have-you-done-for-me-lately theory. While Tiz the Las continues to train well in Florida for trainer Barclay Tagg, Nadal put away a field filled with highly-regarded horses and won the second division of the $500,000 Arkansas Derby by three lengths. I’m also putting Baffert’s Charlatan up to No. 2 after his six-length romp over a less talented field in the first division of the Arkansas Derby.

Nadal (4-0), Charlatan (3-0 and Authentic (3-0, and No. 4 this week) are trained by Baffert. If Santa Anita is given the OK to resume live racing, Authentic could run next in the rescheduled Santa Anita Derby on June 6.

Neither Nadal (the Derby points leader with 150) nor Charlatan (100 points for fourth-place) ran as 2-year-olds, and Authentic has raced once as a 3-year-old. That would seem to bode well for the trio of lightly-raced colts with so much time to before the Derby. Other Baffert 3-year-olds with Derby points are Maximum Words, Azul Coast, Eight Rings and High Velocity.

The next Derby points qualifier is set for the Matt Winn Stakes (G3) at Churchill Downs on May 23. The points distribution is low — 10-4-2-1 for the first four finishers – but every point counts toward earning one of 20 berths in the starting gate on Sept. 5.

Tiz the Law, my No. 1 after his impressive victory in the Florida Derby (G1) way back on March 28, is No. 3 this week, but that’s no knock on this colt that looks every bit a champion. His next start is unknown, but hopes are he will race at Belmont Park and/or Saratoga, if/when live racing re-opens in New York.

Baffert joked he’d have to bubble wrap Nadal and Charlatan for a while, so the next race for these two has yet to be determined. A few other Arkansas Derby runners earned their way into the top 10, so let’s have a look:

Named for the tennis great, all we can say it’s tough to envision Nadal losing as long as he keeps his form from the Arkansas Derby … He simply dusted a field that included the Tampa Bay Derby winner, the Louisiana Derby winner and the BC Juvenile winner … Upped record to 4-0, which also includes wins in san Vicente (G2), the Rebel (G2) … No. 1 on points leaderboard (150) … Next start: TBD … Derby Future Wager Odds: 9-1. 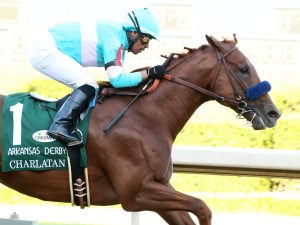 Biding time in Florida, but training well for Sackatoga folks … Four workouts since winning Florida Derby by 4 ¼ lengths on March 28 … Most recent work was May 2 at Palm Meadows Training Center, 5 furlongs in 1:01.45 … No. 2 on points leaderboard (122) … Next start: TBD … Derby Future Wager Odds: 5-1.

If you thought his Tampa Bay Derby was a fluke (at 49-1), think again … Clearly second best behind Nadal in Arkansas Derby (second division), and deserves a spot in here … A late Triple Crown nomination, son of Uncle Mo is owned by former baseball star Victor Martinez … Colt has closing ability and you have to give him a chance at 1 ¼-mile Derby distance … No. 5 on points leaderboard (90) … Next start: TBD … Derby Future Wager Odds: 36-1.

Worked 5 furlongs in 1:00 at Santa Anita on May 2, third fastest of 92 at same distance … San Felipe runner-up to Authentic now has seven times works since that start on March 7 … Lightly-raced with just three starts … No. 24 on points leaderboard (20) … Next start: Santa Anita Derby, June 6 (tentative) … Derby Future Wager Odds: 15-1.

Basin is back, even though a distant second to Charlatan at Oaklawn … High hopes early were dashed with a third in the Rebel and fourth in Oaklawn Stakes, but Asmussen sees an improving colt … Plus, Silver Prospector ran himself out of the top 10 and right now this may be Asmussen top Derby prospect … No. 10 on points leaderboard (50) … Next start: TBD … Derby Future Wager Odds: 56-1

Best we can say is that this gray colt closed nicely, a neck behind Basin for runner-up in Arkansas Derby (first division) … 2-1-1 in five starts for Hall of Fame trainer and jockey with a pedigree fit for the Derby distance … No. 14 on points leaderboard (34) … Next start: TBD … Derby Future Odds: 31-1

A long shot for sure at this stage, but new Hall of Famer Casse has won last two Triple Crown races, so surely he wants to keep the streak going … a son of top sire Tapit, gray colt has a 2-2-2 record in nine starts … Won Lecomte, second in a division of the Risen Star and fifth in the Louisiana Derby … Worked 4 furlongs in 49.20 on April 29 at Casse Training Center in Ocala, Florida … No. 15 on points leaderboard (33) … Next start: TBD … Derby Future Wager Odds: 33-1.