Run over Aqueduct’s main track, the $250,000 Withers Stakes (G3) is one of the oldest stakes for 3-year-olds in the country. The race was named New York businessman, horse owner and breeder, and one time Monmouth Park owner David Dunham Withers, who owned the colt King Eric when he won this race in 1890. 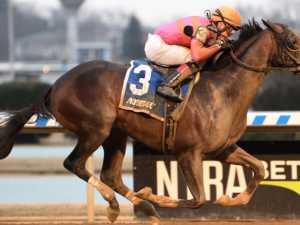 The Withers has been run at five different tracks since first contested in 1874 – Jerome Park, Morris Park, Jamaica Race Course, Belmont Park and now Aqueduct. It was not held in 2011, but was brought back in 2012 and has remained a staple as an early New York prep for the Kentucky Derby (G1).

Since it was first run and won by a horse named Dublin, some highly talented sophomores have added their names to the winners’ list, including Colin, Sir Barton, Man o’War, Count Fleet, Polynesian, Hill Prince, Native Dancer, Dr. Fager, Ack Ack, Bold Reasoning, Key to the Mint, Housebuster and Bernardini. Two years ago, Godolphin’s promising homebred Avery Island won but was injured days before the Gotham Stakes and has only run once since. Last year, Tax took home top honors before going on to finish 14th in the Derby, though he did win the Jim Dandy (G2) at Saratoga over the summer.

The legendary trainer “Sunny” Jim Fitzsimmons saddled six Withers winners over his stellar career, and the great jockey Eddie Arcaro rode six winners. The only jockey in this year’s field to have ever won a previous Withers is Junior Alvarado, who was aboard Tax a year ago.

Again this year, Saturday’s race offers 10 Road to the Derby points to the winner to make the gate for the Run for the Roses, which for at least a brief period puts them squarely in the top 10 since the leader, champion Storm the Court, has 22 points heading into the weekend.

Lately, the Withers has been a strong prep for both next month’s Gotham (G3) and April’s Wood Memorial, but hasn’t had much of an impact on any of the Triple Crown races.

On Saturday, the connections of eight will send their horses out for the nine-furlong test in an effort to reverse that trend and make a statement on the road to the Derby.

The polar vortex that gripped much of the U.S. this week, including New York, is expected to have passed by Saturday, but it will still be cold and the area will be lucky if the temperature rises above 40 degrees. The Withers is the ninth race with a post time of 4:30 p.m. ET.