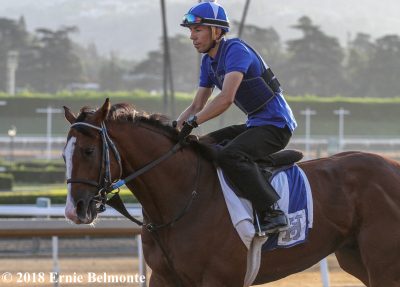 A year ago, the racing world witnessed eventual Triple Crown winner Justify, who at the time was unraced as a 2-year-old with just two starts under his belt as a sophomore, make his stakes debut in the Santa Anita Derby (GI) and stamp himself as the runner to beat in the Kentucky Derby (GI) with his easy wire-to-wire score by three lengths.

The victory immediately earned the flashy chestnut a spot in the gate under the Twin Spires four weeks later and, as we all know, he’d eventually go on to earn racing immortality and retire after the Belmont Stakes (GI) in June.

So, while there’s no Justify in this year’s 83rd edition of California’s major prep for the Run for the Roses, a solid field of six will line up and race the nine furlongs over the Santa Anita main track. The race is one of the final to offer points on the Road to the Derby on a scale of 100-40-20-10 to the top-four finishers.

The day’s main event, which has been carded as Saturday’s eighth race, will go off at 4:14 p.m. PT. This year, the local weather calls for dry conditions and warm temperatures reaching to near 70 under partly cloudy skies.

In 2014, two-time Horse of the Year California Chrome won Santa Anita’s top prep before wearing the garland of roses in Louisville and, in 2012, I’ll Have Another also won, joining the list of past winners that is made up of nothing but Hall of Famers — A.P. Indy, Sunday Silence, Winning Colors, Affirmed, Majestic Prince and Swaps. Other names to have started or won include Pioneerof the Nile, Point Given and Free House, as well as off-the-board runners Silver Charm, Giacomo and many more. Exaggerator romped to a 6 ¼-length victory in the slop three years ago before finishing second in the Derby and capturing the Preakness Stakes (GI) and, two years ago, the race would be the last career win for the now-retired Gormley.