What a Racehorse! Tiz the Law Romps in Travers

Say what you will about this most unusual year of racing, but Tiz the Law is a superstar of a racehorse.

This time, on a brilliant, sunny Saturday at Saratoga Race Course, Tiz the Law took command in the stretch and, under a hand ride from Manny Franco, simply cruised to a 5 ½-length victory in the $1 million Runhappy Travers Stakes (G1). 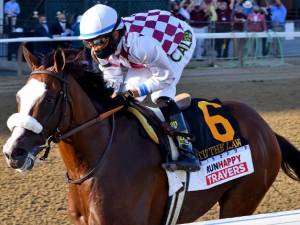 The New York bred racing for local owner Jack Knowlton’s Sackatoga Stable was sent off as the overwhelming 1-2 favorite in the field of seven 3-year-olds. But once the first mile was completed, the final quarter-mile was all Tiz the Law.

Taking the leading from Uncle Chuck around the final turn, Tiz the Law’s flawless strides carried him into the clear, and once Franco peeked under his right arm to see where the rest of the competition was, he let up and just easily rode his horse to the finish.

“It’s the way I thought he would be all along,’’ trainer Barclay Tagg said. “I thought he’d have to come to Uncle Chuck into the stretch and he would go by him if he quit. It went so easy for him, which is fine with me, too. The easier, the better.”

If anyone needed proof that Belmont Stakes (G1) winner Tiz the Law ($3 on a $2 win bet) will be a strong Kentucky Derby (G1) favorite for the rescheduled Sept. 5 Derby, this was all that was needed.

When the gates opened, the Bob Baffert-trained Uncle Chuck, the second betting choice at 5-2, went for the lead with long shot Shivaree and Tiz the Law in close pursuit.

As they went by the grandstand for the first time – void of spectators due to the COVID-19 pandemic – Shivaree and Tiz the Law remained parked to Uncle Chuck’s outside, who led through a quarter-mile in 24.65 seconds. The trio remained in close proximity through half mile in 48.36, with three quarters in 1:11.95.

Rounding the far turn, Shivaree dropped out of contention and Tiz the Law began gearing up to pounce on the pace-setter. Given his cue at the quarter-pole, Tiz the Law set sail and hit the straightaway a clear length.

“We saw a performance today that just blows you away,’’ Knowlton, who was at the track, said. “We know we have a nice horse. We thought we had the best horse, but to do what he did today … We’re looking forward to going to Kentucky.”

Added Tagg, who teamed with Sackatoga to campaign Derby and Preakness winner Funny Cide: “I’ve been doing this a long time and I’ve always wanted to win the Travers. This has been in my head my whole life. And now it happened so it couldn’t be better.

“You always have some doubt because many different things can happen. That’s always in the back of you’re a mind, but I was very confident in the horse.”

Tiz the Law has been sensational this year, and most of last year as well. The son of Constitution, purchased $110,000 just across the street at the Saratoga sales in 2018, already is a four-time Grade 1 winner – and the Derby and Preakness (Oct. 5) – and a possible Triple Crown are still ahead.

Tiz the Law earned 100 Derby-qualifying points to increase his leading total to 372. Caracaro earned 40 points for second to move into 10th on leaderboard with 60 points, while third-place finisher Max Player picked up 20 points to move to No. 9 (60 points).

Franco said his colt, as usual, ran great, even at the 1 ¼ distance he hadn’t run before (plus, it’s the same distance as the Derby)

“He ran huge. He was there the whole way for me and I was just waiting for the moment because it is a long way to go – a mile and a quarter – and he hasn’t gone that distance before, so I’m trying to save as much horse as I could before I made my move,’’ Franco said.

At the finish, he was on cruise control.

“I had a lot in the tank and I was just trying to save horse, because there’s still three or four more races to go, so I have to save some horse,’’ Franco said.

As for Derby plans, Tagg won’t be changing much.

“We’ll give him 10 days of easiness and then get a few more breezes in him before we go out there,’’ Tagg said of the trip to Louisville. “That’s about all we can do.”

Gamine has done it again, and winning the Test was no test at all, as the 3-year-old star filly pulled away from Venetian Harbor in the stretch and won easily by seven lengths.

Last time out, the filly by Into Mischief rolled to an astonishing 18 ¾-length victory in the Acorn (G1) at Belmont on June 20. This time, in a field of six, Gamine ($2.60) was stalked by Venetian Harbor, but the Bob Baffert-trainee turned it on under John Velazquez and won in impressive time of 1:20.83.

Gamine has now finished first in all four of her starts, with an asterisk. After breaking her maiden by 6 ¼ lengths in March at Santa Anita, Gamine edged Speech by a neck in an optional claimer at Oaklawn Park on May 2, but later was disqualified when she tested positive for an overage of the medication lidocaine.

After dusting the field in the Acorn, her post-race test was negative, leaving her on top of the 3-year-old division, especially after her win at the Spa.

“When she gets her legs going she goes so fast,’’ Velazquez, who was aboard her in the Acorn, said “She covers so much ground and it’s hard to believe she’s going that fast.”

“She’s rising straight to the top. With what she’s accomplished so far, as a lightly raced filly, we’re looking forward to stretching her out, and we’ll see what come of that,’’ Jimmy Barnes, Baffert’s longtime assistant Jimmy Barnes said.

Serengeti Empress ($8.30) began the race slowly, was gunned quickly to the lead, and then held off a few stalkers as well as closing-with-every-step Bellafina to take the Ballerina by one length. 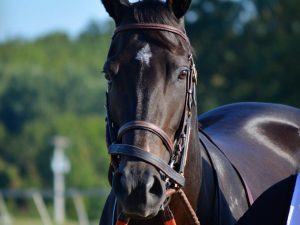 Usually breaking on top, the 4-year-old Serengeti Empress left from the rail as Letruska and Cookie Dough started fastest, but jockey Luis Saez (aboard the filly for the first time) urged her to the lead quickly and the Kentucky Oaks (G1) winner stayed in front the rest of the way home.

The opening quarter-mile was run in a sizzling 21.75 seconds, the half-mile in 43.74 but 7 furlongs – Serengeti Empress’ first sprint in nearly a year – seemed to be the perfect distance for the filly. In addition, the race is part of the Breeders’ Cup “Win and You’re In” challenge and gives the Tom Amoss-trained filly an automatic berth in the BC Filly & Mare Sprint (G1) at Keeneland on Nov. 7.

“We’re looking forward to it,’’ Amoss said in the winner’s circle, referring the Breeders’ Cup in which the Filly & Mare Sprint distance is 7 furlongs.

As for the Ballerina, Amoss said his filly was “very valiant” in taking over the lead she usually has from the get-go.

“She didn’t break on time. She was a step slow, but when you go seven-eighths and you have that opening on the track before you hit the main track, you get an opportunity to catch up, and she did,’’ Amoss said. “She was able to regain her position, but I really thought that opening half-mile in 44 and change (43.74) was going to be her doing in. I thought we learned a lot about her today. What we learned is that this is a real good middle-distance filly.

Serengeti Empress won for the second time in five starts this year, and has a career record of 17-7-3-1 for owner Joel Politi. She came into the race off a fourth-place finish behind Midnight Bisou in the Fleur de Lis (G2) at Churchill Downs on June 27.

“I had a perfect trip, no excuses. The winner ran a huge race,’’ Jose Ortiz said. “We tried to keep up and I thought I had her at the top of the stretch, but she’s a very nice filly. She won the Oaks and she’s very nice.”

Nobody likes a DQ, but in this case it was necessary, giving runner-up American Sailor ($16.80) the victory after first-place finisher Imprimis was taken down by the racing stewards for interfering with Shekky Shebaz in the stretch.

After the finish, the foul objection was filed by jockey Irad Ortiz, Jr., aboard Shekky Shebaz, against Imprimis, ridden by his brother, Jose Ortiz.

Imprimis crossed the finish line 2 ¼ lengths ahead of American Sailor, who was ridden by Tyler Gaffalione. Shekky Shebaz was moved up to second from third, and Imprimus was dropped the third.

“When I hit him the first time, that’s when he switched leads and I think that’s when I bothered the other horse,” Jose Ortiz said. “It looked like (Imprimis) was the best horse but probably did cost the other horse (Shekky Shebaz) a position.”

“In these types of races, there’s not a lot of pace. I thought Jose came to the paddock with a really good plan,’’ winning trainer Chad Brown said. “He said he was going to try and stay closer and he was able to find the one during the race to follow which I thought was smart (Fools Gold). We didn’t change her style, but we stayed with the pack this time and didn’t let her fall too far back. Jose deserves a lot of credit for that.”

The race is named for owner Peter Brant’s 1979 champion older mare. It was the first North American win for My Sister Nat in six starts.

“It’s definitely special,” Brown said. “It’s a race we’ve been targeting since he got back in the game. She just went into the Hall of Fame last year, the great Waya. That was really great to win this.”