Forgive his sixth-place dud in the Belmont Stakes (G1), because Sole Volante was coming back in only 10 days for his second start off a three-month break. 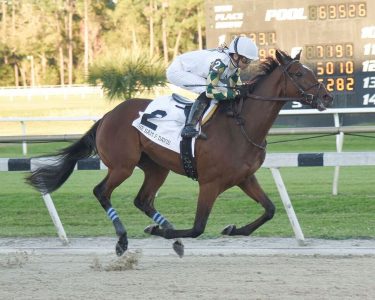 That was his first off-the-board finish in seven career starts. It also was his first time beyond 1 1/16 miles, and you have to wonder whether he can produce his strong closing kick going 10 furlongs.

Never beaten top 3-year-olds on dirt, so the Derby is a major ask. Won’t win, but gelding has an outside chance to inflate the superfecta payoff.

Plans call for horse to arrive on Sunday by van from Florida after prepping for Derby at Palm Meadows Training Center. His last posted workout was Aug. 18 – a mile on turf in 1:39.00.

Notes: Italian Luca Panici sustained two broken ribs in a spill at Gulfstream Park in April, but has been back aboard Sole Volante his last two starts, winning an allowance optional claimer before finished off-the-board in the Belmont … Veteran has been riding in the U.S. on a consistent basis since 2005 and has won nearly 700 races from nearly 7,300 starts … This will be his first Derby … Frenchman Biancone’s best Derby finish was third with Lion Heart in 2004 (the horse later won the Haskell) … Earlier this year, the 68-year-old trainer said he was cancer-free after having his left kidney removed … in 2007, Biancone was at the center of an investigation by the Kentucky Horse Racing Authority involving the use of cobra venom, a banned neurotoxin that can relieve pain in a joint or nerve. He was suspended for a year, later reduced to six months … This will be Biancone’s fourth Derby starter … Reeves Thoroughbred Racing is Dean and Patti Reeves, owners of 2013 BC Classic winner Mucho Macho Man, who was third in the 2011 Derby … Andie Biancone’s 22nd birthday present from her dad last April was ownership of Sole Volante.

(US Racing’s Kentucky Derby coverage will include profiles of the horses listed as probable for the race on Saturday, Sept. 5. Each day until the post-position draw on Tuesday, Sept. 1, US Racing will publish selected profiles of the contenders.) 2020 Kentucky Derby (current field of probable starters, with trainer and jockey; post-position draw is Sept. 1)