What’s been anticipated for months became official on Tuesday: Tiz the Law is the prohibitive 3-5 morning-line favorite for Saturday’s $3 million Kentucky Derby (G1), which drew an 18-horse field.

Adding more intrigue to this unique Derby field is that Tiz the Law will attempt to become the first horse to win from the No. 17 post (0-for-41).

As the draw moved toward the final three slots, Tiz the Law’s post still hadn’t been determined.

“It came down to 1, 2 & 17, so we certainly prefer the 17,’’ Jack Knowlton, operating manager of Sackatoga Stable said on Twitter. “Should give Manny [Franco] options being outside.”

In a few last-minute changes, Blue Grass (G2) winner Art Collector was declared out of the race with a foot injury, and South Bend was a late entry into the field.

A quick look at the field, by post position and odds:

Hall of Fame trainer Steve Asmussen sends out Max Player, and says an inside post means his horse needs to get a good jump out of the gate and not get funneled to the back of the back in the dash for the first turn. Of Tiz the Law, he said:

“Obviously, he’s a tremendous horse. The Belmont and Travers could not have been more visually impressive. With horses, he got paid for those days, and now he has to do it again.”

Unbeaten in 2020 – the son of Constitution won the Holy Bull (G3) and Florida Derby (G1) in his first two 2020 starts — Tiz the Law could become the second New York bred to win the Run for the Roses. The star colt purchased for $110,000 is owned by Sackatoga Stable and trained by Barclay Tagg, the team that gave us New York-bred Funny Cide, the ground-breaking winner of the 2003 Derby and Preakness (G1).

After a four-month delay due to the coronavirus pandemic, the 146th Derby is now just a few days away. It will be like no other – spectators are not allowed, the infield will be empty, no tens of thousands of Mint Juleps, and only essential personnel will be allowed on site. Strict health and safety measures will be ongoing.

Once the gates spring open – post time is 7:01 p.m. ET; the race will be broadcast by NBC – millions will be watching at home or attending Derby gatherings, and it’ll be all about this: Can Tiz the Law be beaten?

There are some pretty good 3-year-old challengers, most of them Tiz the Law has yet to come up against. 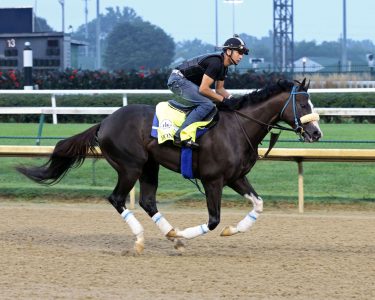 Art Collector was the likely second choice before he was pulled out of contention. But there’s the California contingent of Santa Anita Derby (G1) winner Honor A.P., the Baffert duo of Authentic and Shared Belief winner Thousand Words, and 2-year-old champion Storm the Court, looking to end an 0-for-5 losing streak in 2020.

From Florida, there’s Tampa Bay Derby (G2) winner King Guillermo, who hasn’t run since May 2, when he finished second to Nadal in a division of the Arkansas Derby (G1). Sole Volante has been training on turf at Palm Meadows Training Center and who knows what kind of race he’ll produce.

This year, the Triple Crown has gone topsy-turvy, with the Belmont run as the first leg instead of the last, followed by the Derby and Preakness (Oct. 5). Plus, a bunch of Derby preps were canceled and/or rescheduled and other races were added as Derby points qualifiers.

Tiz the Law led the way with 372 points, while two Derby entries – Money Moves and Mr. Big News – are in the field with zero points because not enough point-earners were being considered to fill a maximum field of 20.

South Bend, trained by Hall of Famer Bill Mott (his Country House was the 2019 Derby winner) has 18 points, with a second-place finish in the Ohio Derby (G3) and a fourth in the Travers.

Some of the other storylines in this Derby include Baffert’s attempt at a record-equaling sixth Derby victory (Ben ‘Plain Ben’ Jones has the record), while Asmussen sends out Max Player (formerly trained by Linda Rice) in an attempt at his first Derby win (he’s 0-for-20).