The Santa Anita Derby (G1) winner looks like one of the few who’s capable of upsetting Tiz the Law. 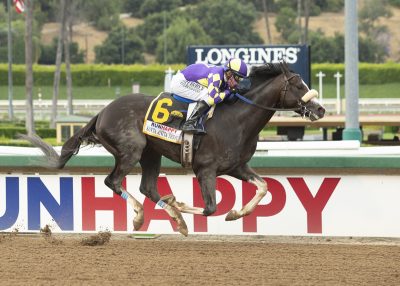 Honor A.P. jockey Mike Smith tells us: “I have a legitimate chance. I think my horse is good enough to win if he brings his ‘A’ game.” A brilliant workout on Aug. 15 at Del Mar (5 furlongs in 59.40 with a powerful gallop-out) improved his case.

To Smith, the loss to Thousand Words in the 1 1/16-mile Shared Belief Stakes at Del Mar on Aug. 1 is a throw-out because the distance was too short and because Honor A.P. wasn’t fully cranked up. His pedigree says 1 1/4 miles should be no problem, and he deserves serious consideration as an alternative to the heavy favorite.

Worked 5 furlongs in 1:00.20 at Del Mar on Aug. 22, eighth fastest of 74 at the distance. One more work before heading to Churchill Downs on Monday.

Each profile will be updated with morning-line odds and post position after the field is drawn on Tuesday, Sept. 1.

Notes: This will be the fifth Derby starter for Shirreffs, who sent out Giacomo (Smith was aboard) to win the 2005 Run for the Roses at odds of 50-1 – among the biggest upsets in the history of the race … Hall of Famer Smith will be riding in a record-equaling 26th Derby – matching the mark held by the great Bill Shoemaker, a four-time Derby winner; Smith has two Derby wins, Giacomo in 2005 and Justify in 2018 … Owner C R K Stable (Lee and Susan Searing) had one previous Derby starter, Candy Boy (13th, 2004).