Trivia question: Who’s the only horse in the Derby field to finish ahead of Tiz the Law?

It’s Finnick the Fierce, the one-eyed gelding who was 87-1 when he edged the superstar by a head for 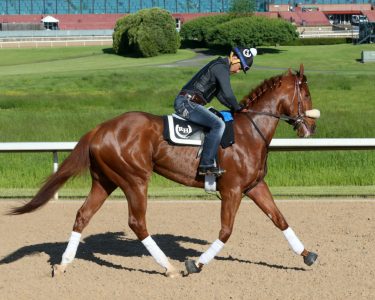 Don’t expect that to happen Sept. 5. “Finnick” is gritty and easy to root for, but he hasn’t finished first in his last eight races, although he was moved up from second to first in an allowance/optional claimer on April fourth after Winning Impression was DQ’d.  on April 4). In his previous ran, he was seventh in the Blue Grass.

The streak won’t end in the Derby.

Profiles will be updated with morning-line odds and post position after the field is drawn on Tuesday, Sept. 1

Notes: Finnick’s right eye was removed shortly after birth due to a congenital cataract, but Dr. Arnaldo Monge, the veterinarian who made the diagnosis, still purchased him for $3,000; trainer Rey Hernandez is co-owner …  This will be Hernandez’s first Derby starter in his sixth year as a trainer  … Garcia will be competing in his fifth Derby. His best finish was third with Bob Baffert-trained Dortmund in 2015.