My wife, Jean, and I were in Lefty O’Doul’s, the famous San Francisco saloon, while on vacation nine years ago. While chatting with a friendly, 30-ish woman a few stools away, the conversation turned to jobs. I said I was a journalist, and she asked what I wrote about.

The TV above the bar was showing a race, so I pointed at the screen. “You cover the horses?” she asked, clearly impressed. “I love going to the track.” 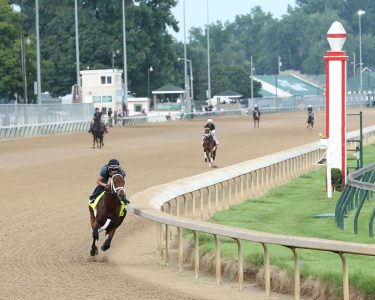 It was an amusing reminder about how lucky I was to be a racing writer, and about how cool that seemed to so many people. The Derby week assignment never got old, even though after my first few for Newsday and ESPN it became more of a drill than a thrill. I would tell people to pinpoint a day and time and I could say exactly what I’d be working on. Except for the occasional breaking news, the template rarely varied.

That was to emphasize I was actually working, not on a paid holiday. I wasn’t complaining. I always got a kick out of knowing I was exactly where I wanted to be, in the midst of the frenzy spawned by the world’s most famous race.

Not this week. For the first time since 1992 I won’t be there, and it will be strange to hear “My Old Kentucky Home” from far away in Long Island. I regret my Derby streak will end at 27, but with Louisville a COVID-19 hot spot, there was no way I was going to make the trip.

The pandemic pushed back America’s Race four months, then forced it to be run without spectators. I never thought Churchill Downs would choose “an abundance of caution” over megabucks, but it had to be done.

“It’s not a day I hoped would come,” track president Kevin Flanery said. “But everything this year has been unprecedented. I’ve had people tell me they’ve been to 40 or 50 consecutive Derbies, and they wanted to keep their streaks alive. We hate that we had to do that to them, but it’s the right decision.”

For the few there, the 146th Derby at “The World’s Most Legendary Racetrack” will feel like a bad dream. No deafening roar as the gates open. No wall of noise when the field surges into the stretch. No howls of exultation and pain in the final furlong.

And that’s just what will be missing for 122 seconds or so. The buildup for “The Greatest Two Minutes in Sports” is a unique blend of excess, over-the-top sentimentality and greed. The tourists can’t eat and drink enough, and the prices are obscene. A three-mile taxi ride can cost $35, not including tip. Hotel rooms that go for $70 the rest of the year gouge you for $400 a night on Thursday, Friday and Saturday – the dreaded “Derby Package.”

Another casualty of COVID-19 is “Dawn at the Downs,” which welcomed the public to the backstretch from 6:30 until 9. Cell phones filled with keepsake videos and photos of magnificent animals training for the Oaks and Derby.

On Saturday, without the usual mob of 155,000 or so slugging down Mint Juleps, the atmosphere will be nonexistent. NBC’s announcing crew will describe what’s missing, but it will be empty eloquence.

There won’t be much to show, either. No high rollers upstairs in The Mansion, no celebrity parade on the red carpet, just empty seats and a vacant infield. Welcome to Derby dystopia in the year of the plague. 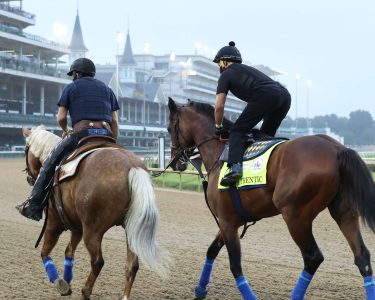 “There’s not going to be anybody out there. It’s going to be weird,” said Jack Wolf, who co-owns Derby contender Authentic. “I grew up in Louisville and the Derby is very important. We normally have a party over at the house, but none of that’s going to be done this year, so it’s going to be disappointing.”

I’ll be on my couch, thinking of the unique wackiness of Derby Days gone by. Being stuck in a press box from 9 in the morning to 10:30 at night is stifling, so I always took a few walks to shorten racing’s longest day. Behind the grandstand and around the paddock it’s so jammed that you need the agility of a punt returner to navigate the mob.

Fortunately, I can walk sideways and squeeze through small openings. I’m also good at anticipating the next lurch of someone who’s been drinking bourbon since sunrise. Some skills can’t be taught, you just have to pick them up on the fly.

Sometimes I’d visit the low-rent district, the infield, to savor the vibe of a barbarian wedding. Semi-clothed revelers, mainly under 30, risking heat stroke and alcoholic poisoning while partying until they drop. Designated drivers are desperately needed but in short supply.

As Irvin S. Cobb, the sage of Paducah, Kentucky, put it long ago: “Until you’ve been to the Kentucky Derby, you ain’t never been nowhere and you ain’t never seen nothin.’’’

So true. I’ll miss being at the greatest show on dirt for the first time in a long time. Resolution for 2021: Start another streak.