In the days leading up to the 147th running of the $3 million Kentucky Derby (G1), usracing.com is profiling all the contenders. The 1 ¼-mile Run for the Roses at Churchill Downs is May 1 and the first leg of the Triple Crown. All profiles will be updated with post positions, odds, and jockeys following the draw on Tuesday, April 27.

There is a bull market for Super Stock these days after the colt with deep Asmussen family roots saw his stock skyrocket when he was the 12-1 upset winner of the Arkansas Derby at Oaklawn Park on April 10.

The victory was his first of the year and his first top level score, and when he grabbed the 100 points in his last chance to qualify for the Kentucky Derby, he vaulted from 31st to third on the leaderboard with 109 points.

In the winner’s circle, Hall of Fame trainer Steve Asmussen said the experience isn’t just a family affair, it’s a story made for Hollywood. He wasn’t kidding. 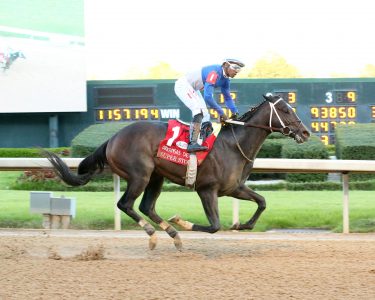 Super Stock, a $70,000 yearling, is owned by his father, Keith Asmussen, and Keith’s best friend, Nashville icon Erv Woolsey, who is the manager of George Strait, Lee Ann Womack, and other country music stars.

Steve’s son Keith J. Asmussen, named for his grandfather, was in his first year as an apprentice jockey last year while his University of Texas-Austin classes were moved online and was aboard Super Stock when they won the Texas Thoroughbred Futurity at Lone Star for the colt’s only other win and Keith J’s only stakes win and fourth overall.

The cherry on top is that the Arkansas Derby win was the first Grade 1 win for the longtime partnership and friendship of Woolsey and Marilyn and Keith Asmussen.

“Now they have one of their own, trained by their son, and is the horse their grandson won his first stakes race on,” Steve said April 14. “The scenario in which Dad and Erv still own the horse is the unique part. They sold horses who went on to win grade ones in the past, and that’s probably what would have happened with Super Stock if not for the pandemic and the cancellation of the 2-year-old sales.”

Asmussen has trained three Horses of the Year in Curlin, Rachel Alexandra, and Gun Runner and won the Preakness twice, the Belmont, the Dubai World Cup, and seven Breeders’ Cups but has never won a Kentucky Derby in 21 tries, the sixth most attempts in history. The two-time Eclipse Award winner has long maintained it would be a dream come true to take a horse to the Derby for his parents, and now he has the chance to wrap it up in a bow for the Hollywood ending.

“You think about the scenario of winning a race of that caliber (Arkansas Derby) for your parents, and the story with the horse, and then it happens,” he said. “I’m experiencing all of the emotions afterward. The best thing that I have felt through the whole process is how happy everybody is for my parents and Erv. What a great example of the respect and love people have for them, and what a wonderful feeling that is.”

Running style: Off the pace

Notes: Asmussen has two chances to win the Derby this year and will saddle Midnight Bourbon, a very solid second in the Louisiana Derby for longtime clients Winchell Thoroughbreds. The Winchells have come up empty in 11 previous tries … Super Stock, a classic late bloomer, got a dream trip in the Arkansas Derby when the expected speed duel between the previously undefeated Concert Tour and Caddo River developed and he was in the garden spot to overtake his exhausted rivals. “What I was thinking throughout the race was this is the chance you wanted. Caddo River being away a step slow, Concert Tour breaking sharply and asking for the lead. These were the scenarios that were ideal for us. Ricardo did a wonderful job using his post position going into the first turn and using that position,” he said. “The horse was good enough to hold it and maintain it and carry him extremely well and he finished up from there.” … Keith J Asmussen didn’t ask his dad or his granddad if he could get the mount back for the Arkansas Derby or the Kentucky Derby. He’s back at UT, which had shut down the campus due to COVID-19, now that in-person classes are in session again … Santana is 0-for-6 in the Derby … Super Stock is bred to get the distance. His maternal grandsire is Closing Argument, second to Giacomo in the Derby and on his paternal side descends from 1977 Triple Crown winner Seattle Slew.