The road to the Kentucky Derby is stressful and filled with obstacles, and only the fortunate few make it to the starting gate on the first Saturday in May. On Wednesday [April 7], multiple-stakes winner Greatest Honour and UAE Derby champion Rebel’s Romance were declared out of the 147th Derby on May 1. 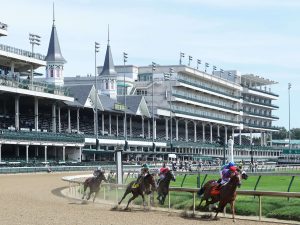 Trainer Shug McGaughey announced that Greatest Honour, a distant third as the 4-5 favorite in the March 27 Florida Derby (G1), would be given a 60-day break. Since that defeat, the deep closer reportedly was not training as well as McGaughey would have liked.

“I wasn’t pleased with how he was galloping,” McGaughey told bloodhorse.com. “We came to the decision [Tuesday] that we need to give him some time off, let him grow into himself.”

McGaughey expressed hope that after being turned out for 30 days, the colt can return to training. The Hall of Fame trainer said no surgery will be necessary. The Daily Racing Form was the first to report the news.

Greatest Honour went off at 9-1 in Pool 5 of the Kentucky Derby Future Wager Pool, behind only two undefeated colts, Essential Quality (4-1) and Concert Tour (5-1). He was listed at 14-1 by BUSR.

Greatest Honour’s three-race winning streak this winter at Gulfstream Park, where he took the Holy Bull (G3) and Fountain of Youth (G2), convinced many that he could give McGaughey his second Derby trophy.

The withdrawal of Rebel’s Romance was not nearly as surprising as the defection of Greatest Honour. No UAE. Derby winner has finished better than fifth in the Derby, where they are 0-for-16, and even after his 5 1/2-length runaway in Dubai it sounded unlikely that the Godolphin homebred would come to Kentucky. He’s based in England with trainer Charlie Appleby, who tweeted Wednesday that the 4-for-5 colt would be aimed for the Belmont Stakes (G1).

“Having spoken to His Highness Sheikh Mohammed, we feel he needs more time,” Appleby said in a Twitter post from Godolphin.

It will be the first time since 2014 that the UAE. Derby winner will skip the Run for the Roses. Like Rebel’s Romance, the 5-for-5 Essential Quality is owned by Godolphin, which has been chasing the Derby without success since 1999.