Keeneland Opens with an ‘Elite Eight’ Weekend of Stakes Races 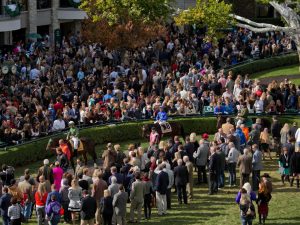 But at the opening of Keeneland’s fall meet on October’s first weekend, these words are a fitting description of the eight elite graded stakes events offering full fields and terrific betting opportunities.

As if that weren’t enough, there’s the additional bonus of an automatic Breeders’ Cup berth through the “Win and You’re In” Challenge Series for each. That all adds up to a veritable “who’s who” of horsemen, horses and riders all hoping to fill their card for thoroughbred racing’s version of the Big Dance – the 2-day, 14-race Breeders’ Cup at Santa Anita Park on Nov. 1-2.

Next up on Keeneland’s spectacular three-day weekend are Saturday’s four bang-up races: the $1 million Shadwell Turf Mile Stakes (G1) and a guaranteed spot to take on the world’s best middle distance horses in the $2 million TVG Mile (G1); the $500,000 Claiborne Breeders’ Futurity (G1) and the chance to contest the $2 million TVG Juvenile (G1) while at the same time earning Kentucky Derby qualifying points; the $400,000 First Lady Stakes (G1) with the winner able to move on to the $2 million Maker’s Mark Filly & Mare Turf (G1); and the $250,000 Thoroughbred Club of America Stakes (G2) with a trip to the $1 million Filly & Mare Sprint (G1) at stake.

Sunday’s action is equally compelling, with the card highlighted by the $250,000 Dixiana Bourbon Stakes (G3) and an opportunity to compete in the $1 million Juvenile Turf (G1) against international and national rising stars; and by the $500,000 Juddmonte Spinster Stakes (G1) with the winner moving on to the $2 million Longines Distaff (G1), which is the race that traditionally crowns the division champion.

The 11-filly field for this year’s Darley Alcibiades features Tracy Farmer’s Perfect Alibi, who has needed no excuses in her blossoming career and figures to go postward as the prohibitive favorite. Trained by 10-time Sovereign Award winner Mark Casse, she has won three of four outings with a second and amassed earnings of $380,988. Not only is she by far the field’s richest, she’s the only graded stakes winner. Even better, she’s a Grade 2 winner with a score in the Adirondack at Saratoga and a Grade 1 winner after her last start in the Spinaway at the Spa on Sept. 1.

The Kentucky-bred, dark bay daughter by Sky Mesa out of the Maria’s Mon mare No Use Denying (hence her name) has never tried two turns nor traveled the 1 1/16 miles of the race, but her breeding strongly suggests she will relish the distance.

“Look at her pedigree and physique. It shouldn’t matter. This filly is just a fighter. She keeps coming. I think the farther she runs, the better she likes it,” Casse, the Canadian Hall of Famer, told the Breeders’ Cup. “She amazes because she’s so laid-back. She doesn’t get excited about anything, but when the gate opens, she’s tough.”

Casse has also entered the Canadian-bred Western Taffy, winner of the Catch a Glimpse Stakes at 6 ½ furlongs on the Woodbine turf in her last. Catch a Glimpse was trained by Casse and gave him his first of five Breeders’ Cup wins when she won the 2015 Juvenile Fillies Turf on this Keeneland course while his son, Norman, was his top assistant.

But those aren’t the only Casse angles of interest in this running of the Darley Alcibiades.

Norman Casse is now out on his own and he has entered Heir of Light, who is owned by Robert Masterson, incidentally the owner of the Casse-trained 2015 Breeders’ Cup Mile winner and two-time champion Tepin, and Crystal Spring.

Heir of Light, a bay daughter of The Factor, has two made two starts and she graduated at second asking in a 1-mile maiden special weight at Churchill Downs on Sept. 13. She will break from post 8 under Julien Leparoux, just outside of Perfect Alibi and Jose Ortiz, and is also being asked to stretch out to 1 1/16 miles.

In the 167th running of Phoenix Stakes, 4-year-old Promises Fulfilled looks to defend his title for owner Robert Baron and trainer Dale Romans as well as become the seventh horse to win in consecutive years.

But the Grade 1 winner so far this year hasn’t been the horse he was last year, when he won four graded stakes before winding up fourth in the 2018 Breeders’ Cup Sprint. Still, he did capture the John Nerud Stakes (G2) at Belmont Park on July 6 — his lone win this year — so he has already qualified through the Challenge Series for his spot in the BC Sprint.

Nevertheless, his connections want to see him headed to Santa Anita on the upswing and most of the other 10 horses in the Phoenix field are seasoned graded stakes campaigners with plenty of talent.

Promises Fulfilled may face his stiffest test against Hog Creek Hustle, a 3-year-old going against older horses for trainer Vicky Foley and Something Special Racing. Hog Creek Hustle gave Foley her first Grade 1 score when he pulled off the upset in the Woody Stephens (G1) for sophomores at Belmont in June and then was beaten a nose in the Allen Jerkens Memorial (G1) against older horses in a race that could have gone any way with three horses hitting the wire together and the result decided by a head bob.