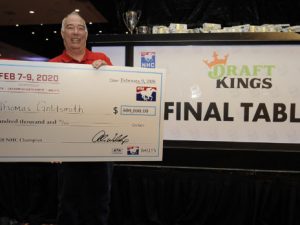 Goldsmith, who will be presented with an Eclipse Award for the winning the title, prevailed over a field of 694 entries in the 21st NTRA National Horseplayers Championship in Las Vegas and won the event’s $800,000 grand prize.

Goldsmith, 57, put on an impressive display of handicapping over the course of the three-day tournament Friday-Sunday, Feb. 7-9 at the Bally’s Event Center. He used a steady stream of winners, including several long shots, to compile a $404.10 final total based on $2 mythical win and place bets on 52 races. His score was the second-highest point total in the history of the event.

And find winners he did. Goldsmith used plays such as his winning bet on Admiralty Pier who won the Tampa Bay Stakes and paid $44 to accumulate the sixth-highest score through the first two days of the tournament when the field was narrowed to the top 70 scorers. He then moved up to fourth in Sunday morning’s semifinal that narrowed the field to a 10-player “Final Table” on Sunday. 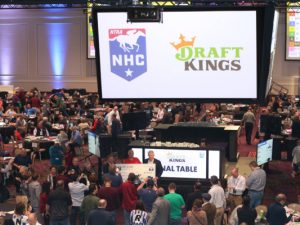 The Final Table was where Goldsmith took control. With his first five bets in the seven-race final round, Goldsmith hit three winners and added a 24-1 place horse to blow past the other finalists, including Sunday’s early leader, John Vail of Lyndhurst, New Jersey. When the championship was on the line, Goldsmith stepped up and grabbed the title.

“I’m just in shock right now. This is it. I’m never going to top this,” said Goldsmith, who was playing in only his second NHC finals after qualifying late in 2019 in an on-site contest at Lone Star Park. “It’s $800,000, how am I going to top that?”

In all, the NTRA gave out $2,997,500 in mostly cash awards at the NHC, including $2,540,000 to the top 71 scorers in the NHC finals tournament and another $350,000 to the top 20 finishers in the NHC Tour, a yearlong point series based on the results of handicapping tournaments on track and online at NTRA-sanctioned events in the U.S. and Canada. The NHC Tour champion for 2019 was David Snyder, 65, of Mission Viejo, California, who earned the $110,000 top prize. 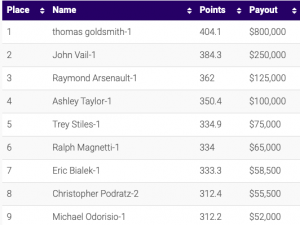 Vail, who had been at or near the top of the leaderboard throughout the three-day contest, held on for second place with $384.30 to earn the NHC’s $250,000 second prize. In third was 2017 NHC winner Ray Arsenault, 68, of Thornhill, Ontario, who won $125,000. No player has repeated as NHC champion. Arsenault came the closest. Finishing fourth was an NHC rookie, Ashley Taylor, 38, of Encinitas, California. Taylor took home the NHC’s fourth-prize of $100,000.

One of the biggest stories of the 2020 NHC Final Table was the eventual fifth-place player, David “Trey” Stiles of Houston, Texas. Stiles, a 52-year-old attorney, is an NHC Hall of Famer and veteran of a record 18 NHC Finals. The fifth-place finish marked Stiles’ best NHC finish, and it was good for $75,000 in purse money.

You cannot buy an entry into the NHC, you must qualify for the finals with a win or a high finish in a qualifying tournament. Qualifying for next year’s NHC is already ready to begin. For more information, visit NTRA.com.