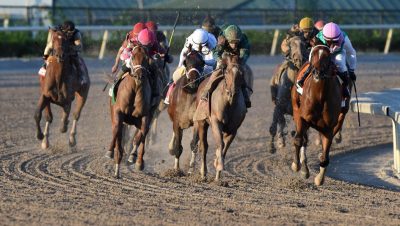 What a year it’s been, one we won’t soon forget as much as we try.

The pandemic impacted every aspect of life, and horse racing was no exception. We were all knocked for the proverbial loop.

We come to the end-of-year juncture when reflection on the last 12 months is possible. The crisis is still unfolding but, with the benefit of time, we can look back with some perspective.

From this vantage point, three themes emerge from 2020 as if plucked from a spaghetti western: The Good, The Bad And The Ugly.

Let’s start with The Good, and there was plenty to go around.

As usual, the horses put on a remarkable show, topped by championship campaigns from Authentic, Improbable, Swiss Skydiver, Midnight Bisou and Essential Quality to name only a few.

The greater Good however, was the sport itself that managed to struggle through shutdowns and restrictions to put on a remarkable show. Yes, it was racing like we’ve never experienced before with a Triple Crown ripped from its springtime moorings to prestigious stakes contested before empty grandstands.

Yet the sport persevered to provide entertainment, and the occasional pari-mutuel thrill, to new and old fans.

It came at a price, requiring tremendous dedication and sacrifice on the part of owners and horsemen. They tolerated financial hardships and endured strict safety protocols to keep the game alive. There were occasional slip-ups, but for the most part, everyone pulled together.

For that, we all owe a deep debt of gratitude.

Now The Bad wasn’t all bad.

The Bad was Bob Baffert, who enjoyed another remarkable year with 16 Grade 1 victories, including the Kentucky Derby and Breeders’ Cup Classic wins by Authentic, the presumptive Horse of the Year.

Even with that banner season, some Eclipse Award voters will hesitate to write the silver-haired trainer’s name on the ballot. The Good was tempered by The Bad as the Baffert barn continued to be plagued by multiple positive tests for medication violations.

Baffert pledged during the Breeders’ Cup telecast to “tighten up the operation.” As the sport’s most recognizable figure, Baffert endures endless scrutiny. Every bad test result adds fuel to the fire of the animal rights activists and the media, especially the New York Times, that apparently want to torch and bury horse racing. The fact that it involves Baffert only builds their case, they argue.

Baffert and his legal representatives claim that the trainer is simply the victim of a string of accidental contaminations.

That might be true, but hundreds of other trainers face the same testing standards and don’t set off alarm bells. A school kid can only use the “dog ate my homework” defense so many times.

Racing needs to have Baffert in the headlines, but only for all the right reasons.

There was no equivocation on The Ugly: the arrests of Jason Servis and Jorge Navarro as ring leaders in a major horse doping scandal that cast a wide net over thoroughbred and harness racing.

Everyone is innocent until proven guilty and the parties involved will eventually get their day in court. While that plays out, the roundup remains a black-eye for a sport that already has enough issues on its plate.

It’s not all gloom and doom. Let’s lift the spirits and look ahead to 2021. We can all wish for more happiness and health in the New Year, fans back in the grandstands and a Triple Crown and stakes schedule reverting to an old familiar feel.

2020, you robbed us of that. We wish you a speedy exit, and a one-way ticket stamped “no return.”