Riley Asher-Stalbaum Is Up for the Task

When you mention harness racing to people, all the stereotypes come out.  Most will say that it is a sport for old people and that young people have no interest in it.

Just when one might start to believe this, you hear stories that revive hope in our great sport.  Schools like Morrisville State have programs in equine racing and management and, each year, the college hosts its annual sale.  Clearly, there is interest by the younger set in harness racing — both the sport and the business.

There are young people both on the scene and on the horizon, giving hope that the sport will carry on for decades to come.  Drew Monti, at age 24, drives at both Buffalo and Batavia; he has also tasted some success at Yonkers and the mecca, the Meadowlands.  He drove horses while attending Canisius College and, even after graduating, he is still driving regularly at both Western New York tracks.

Another youngster on the scene is 18-year old Riley Asher-Stalbaum.  Her name is not new; she is the daughter of driver-trainer Larry Stalbaum and his longtime partner, Kimberly Asher, who trains horses.  Both Larry and Kim have been involved in the sport for years and, now, here comes Riley.  She is the oldest of four with a younger sister and two younger brothers.  They are all involved in the sport, but Riley seems to have the most passion.

“I’ve wanted to do this all my life,” said Asher-Stalbaum in a telephone interview. “Training and owning horses is something that I have always wanted to do.” 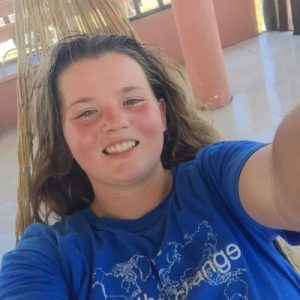 Asher-Stalbaum was home-schooled by her mom and is days away from completing her diploma requirements.  Saying you want to train horses is one thing, getting to do it is entirely different.  But because of her parents, Asher-Stalbaum had a heads-up.

“When I told my parents I wanted to train, mom and dad said, ‘Alright, we’re going to help you out.’”

Her parents gave her five horses to train — and all are accomplished in the Buffalo-Batavia racing circuit.  The leader is the 14-year old, Quicksilver Candy A, who won 22 races last year and has 12 wins in 2018.  But Candy is not the only star of the barn.  The others are Kaitlyn Rae, Storybrook, Motor Shark and the lone trotter of the group, Empire Earl N (Asher-Stalbaum  contends that trotters are more high-strung than the pacers).

Sure, it was nice to get some horses, but there is lots of hard work to do each day.  Asher-Stalbaum lives with her mother in Bergen, New York, a small rural town that is 70 miles from Buffalo Raceway and 15 miles east of Batavia Downs.

“We’re up at six to feed the chickens and goats and, then, it’s time to get the horses going.”

Asher-Stalbaum trains the horses on the farm as it is equipped with a training track.  Her horses jog four miles each day in addition to their training mile and, of course, their races.  The day after a race is usually a rest day where they go in the field for a bit, but have no workouts to do.

Quicksilver Candy is the professional’s professional.  She loves her job, trains hard and has had a wildly successful career in this her final year of racing.  But like many Americans, not all horses love their jobs. Empire Earl N fits that bill.

“He is steady for sure,” Asher-Stalbaum says, “but, to him, it’s a job and there are times when we wonder if he really likes his job.  He is high-strung, tries hard in races, but sometimes cheats in his daily training.”

Kaitlyn Rae fits another category — gamer. She is blind in one eye and they have to watch her for lameness, but she seems to summon the will and grit when the lights are shining.

“She is special.  She takes her time and she will let us know when she is not feeling great, but, at age 9, she absolutely loves race day,” Asher-Stalbaum said.

Thanks to her parents, Asher-Stalbaum has been to many tracks across the New York.  I asked her to give me some quick thoughts on each:

Batavia:  “I like racing here because it’s close to home.  That makes it easier.  It has tight turns, tighter than Buffalo.”

Buffalo:  “We race here and Batavia a lot, a fair track.”

Monticello:  “The people are nice, but the track can be a mess.  It’s hard and deep.”

Saratoga:  “Nice and clean.  I love it; competition has stiffened in recent years.”

Yonkers:  “I like it, that’s where dad is doing a lot of racing this year.”

Asher-Stalbaum has plans to own more horses and even though she will claim, she prefers not to.

“I look for horses,” she said. “I look for people who want to sell their horses.  I want good ones, ones that have racing experience.  I’m not looking for babies right now.”

One advantage of both owning and training your horses is less expense.  Many think of harness racing as a sport where the horse people struggle to make ends meet, but Asher-Stalbaum says that isn’t the case.

“You can make money. You can pay the bills as long as you get good horses.”

She should know.  Her parents have been in this sport for years and it appears that young Asher-Stalbaum is set for the long haul as well.  One has to think that, as her success grows, she will be in more demand with owners looking for somebody to train their pacer or trotter.

For now, it’s the farm in Bergen and racing at Buffalo and Batavia where purses range from $3,500 to $11,500.  That’s the starting point.  If she can do well here, who knows where the next landing spot can be.  Yonkers?  And, with sports betting coming to the Meadowlands, perhaps it could be there too.

Why not all of them?  We all know the big-time trainers with the big-time horses travel across North America.  One week, it’s Woodbine Mohawk Park, the next, Harrah’s followed by the Meadowlands.

It must be nice to know that age 18, you are doing what you always wanted to do.  Not many of us can say that, but Asher-Stalbaum can and, if you like the sport of harness racing, that’s music to one’s ears.  She is determined and will not be deterred.  This is what the sport needs — young people who love and, most importantly, want to do the work that is required to succeed.

Asher-Stalbaum is up for the task.