Tis the season when many of us are busy shopping and planning for the rapidly-approaching holidays.

Gulfstream Park is no different. Racing’s winter showcase on Florida’s East Coast is also in preparatory mode, starting this Saturday with five stakes that will help set the table for the Pegasus World Cup festival on Jan. 25.

Both Bodexpress and Prince Lucky will use the $100,000 Harlan’s Holiday (G3) as a potential springboard to the $9 million Pegasus World Cup (G1).

The biggest moment of fame, or notoriety depending on your perspective, for Bodexpress was the Preakness (G1) when he reared and tossed John Velazquez at the break and then completed a riderless circuit with the field.

The incident tends to obscure the fact that he is a serious racehorse just starting to tap his potential.

Last spring, Bodexpress ran second to Maximum Security in the Florida Derby (G1) before heading to the Kentucky Derby, still a maiden and a 71-1 outsider.

Then it was on to the Preakness, and the follies that ensued.

It’s been a far different story since he returned to the races on Oct. 14, posting his maiden score at Gulfstream Park West/Calder. He followed that with an allowance victory in track record time, making him 2-for-2 in the comeback.

Now he’s back in the graded stakes game with an eye on an even bigger prize.

“if he finishes first or second, he’ll go to the Pegasus — that is my plan,” said trainer and co-owner Gustavo Delgado.

The time off after the Preakness was just what Bodexpress needed.

“It was good for him,” Delgado said. “He’s come back strong and more focused.” 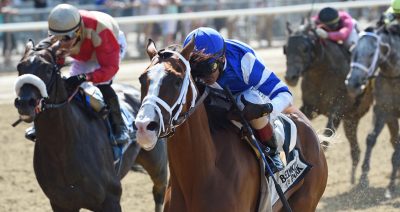 Trainer Todd Pletcher also has designs on the Pegasus for Prince Lucky, who won a pair of stakes here last winter: the Hal’s Hope (G3) and the Gulfstream Park Mile (G2). Most recently, Prince Lucky was fourth to Maximum Security in the Bold Ruler (G3) at Belmont Park.

Grass runners in the hunt for the $7 million Pegasus World Cup Turf (G1) get an opportunity over the course in the $200,000 Fort Lauderdale (G2).

Flavius, the least experienced runner in the field, is the most intriguing contender. We always love a horse with upside potential.

Flavius will make only his fifth start, and second for trainer Chad Brown. He was 2-for-3 in Ireland for Juddmonte Farms before heading to the U.S.

The colt was a rallying fourth in his acclimating effort last month at Aqueduct. We’ll get a better measure of his quality and class in this race.

In contrast, Channel Cat is a proven entity for Pletcher. The Bowling Green (G2) winner was seventh most recently in the Breeders’ Cup Turf (G1).

The suspicion remains that this 1 1-8 mile distance is too short for Channel Cat. However, it is perfect for Cross Border, one of three in the race from the Mike Maker barn.

The $100,000 Sugar Swirl (G3) is the prep for the $200,000 Inside Information (G2) on the Pegasus undercard. The race drew nine fillies and mares going six furlongs, including Heavenhasmynikki, an Ohio bred graded stakes winner for trainer Bob Hess Jr.