Bob Baffert showed up for his first Kentucky Derby (G1) in 1996 with a horse named Cavonnier, winner of the Santa Anita Derby four weeks earlier and given a solid chance to compete against the likes of Unbridled’s Song, Skip Away and five entries from D. Wayne Lukas. When the field turned for home, it was Cavonnier who seemed to gain control, but Lukas’ Grindstonekept cutting into the lead. The pair crossed the finish line together – impossible to determine a winner with the naked eye. A photo gave the win to Grindstone by a nose, but it seemed closer than that.

More than two decades later, with a resume that includes a record-tying six Derby wins and a pair of Triple Crowns, the Hall of Fame trainer still shakes his head about Cavonnier. Baffert has told me on several occasions, it was “the toughest beat of my career.”

On Saturday at Churchill Downs, he was simply shaken by the emotional roller-coaster he was on for about 30 minutes – before, during and after winning the 146th Derby — involving Authentic and Thousand Words, his longtime assistant Jimmy Barnes and himself.

In the paddock before the race, Thousand Words reared up and flipped on his side, knocking down Barnes. Thousand Words stood back up, but had to be scratched per Derby rules. Barnes was taken away in an ambulance, and has a broken wristrequiring surgery.

Stunned, Baffert and family headed to the track, where Authentic shot to the lead and led gate-to-wire in defeating odds-on favorite and Belmont Stakes (G1) winner Tiz the Law. 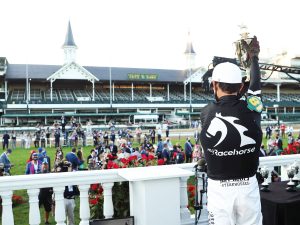 In the winner’s circle on the turf course, Authentic was spooked by long ribbons [hanging from the garland of roses] touching a hind leg. He spun around and knocked Baffert to the ground.

On Sunday, after pronouncing Authentic and Thousand Words fine and likely headed to the Preakness on Oct. 3, Baffert was shaking his head again.

“To me, that was most emotional Derby I’ve ever been involved in,’’ he said. “It was the most crazy 30 minutes I’ve had in racing.”

Up until the Derby, it had been a “tough beat” year for Baffert. His two top Derby contenders Charlatan and Nadal were sidelined with injuries; he was plagued by medication DQ’s; and there was Friday’s loss by star 3-year-old filly Gamine in the Kentucky Oaks (G1).

“Before May, I was looking so strong and then everything just went wrong,” Baffert said. “And to pull it off like that was really exciting. Winning the Kentucky Derby is the biggest moment in a trainer’s life. When you win it, it erases everything that has gone bad.”

Yes, I picked Authentic to win the Derby, and Tiz the Law to run second.

I write this only because it’s the second Derby I’ve picked correctly – the first was Grindstone in 1996 (see above item to find out how lucky a pick that was).

To quote myself from Tuesday, Sept. 1:

… I’m believing Authentic can get 1 ¼ miles despite nearly getting caught in the 1 1 1/8-mile Haskell. With far outside post, Authentic has every chance for a strong start. Tiz the Law? Looks to be the best, but American Pharoah lost, too.”

A $1 million bonus awaits Authentic at BC Classic

Authentic’s win in Saturday’s $3 million Kentucky Derby (G1) makes his connections eligible for a $1 million bonus if the colt goes on to win the Breeders’ Cup Classic (G1) at Keeneland on Nov. 7.

The bonus is being offered by Monmouth Park and Betmakers to the horse that wins the Haskell (G1) – Authentic won the race on July 18 – the Derby and the BC Classic.

“It would be fitting if, in the first year of the $1 million bonus, a horse trained by Bob Baffert earned it,’’ Dennis Drazin, CEO of Derby Development, operators of Monmouth Park, said in a statement.

Baffert won his record-extending ninth Haskell with Authentic, a race that usually comes after the Triple Crown races but the racing schedule was restructured due to the COVID-19 pandemic.