And it’s on with the races at Gulfstream Park.

As racing for the week began Wednesday (March 25), track officials conducted the post-position draw for Saturday’s $750,000 Florida Derby (G1), the signature race of the meet that many times produces the favorite for the Kentucky Derby (G1). 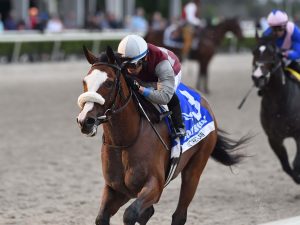 Tiz the Law, considered among the top 3-year-olds and a leading contender for the Derby – postponed from May 2 to Sept. 5 – was installed as the 6-5 morning-line favorite in a 12-horse field for one of three remaining scheduled Derby points qualifying races.

Continued live horse racing, plus the draw, is taking place despite a Broward County ban on conducting non-essential business amid the coronavirus pandemic, and a request to close the track by the city of Hallandale Beach, where the track is located. The Stronach Group, which owns the track, has threatened legal action if the track is shut down, according to a report in the South Florida Sun-Sentinel report.

Owned by Sackatoga Stable, Tiz the Law comes into the 1 1/8-mile Florida Derby off a solid workout last weekend at Palm Meadows training center, breezing 5 furlongs in 1:02.65. The Holy Bull Stakes (G3) winner trained by Barclay Tagg drew the No. 7 post and will be ridden by Manny Franco.

After the Florida Derby, there are two remaining Derby qualifiers – the Santa Anita Derby (April 4) and the Arkansas Derby (rescheduled to May 2 from April 11).

The Wood Memorial at Aqueduct was officially canceled on Wednesday (March 25) as was the rest of the meet. Previous Derby prep cancellations
include the UAE Derby, the Blue Grass Stakes, the Lexington Stakes and the Sunland Derby.

There’s no telling what could happen next on the road to a rescheduled Derby, much of which will be determined based on the status of the coronavirus pandemic.

Among the reasons for running on Saturday, even though the race was the target for months, is “we want to get our points and then not have to worry about (qualifying for the Derby), and hopefully keep him healthy and sound so we’re able to actually run the race on the first Saturday in September,” said Jack Knowlton, managing partner of Sackatoga Stable.

For Ete Indien, the hope is he will continue to improve the way he has been doing up until now.

“The horse keeps improving from race to race,” Biancone said. “Hopefully, he’ll keep improving and we should have a really good horse in the summer.”

The 69th running of the Florida Derby highlights a program with 10 stakes, six of them graded. Spectators are not allowed at the track, but wagering is available at multiple online betting sites.

If you enjoyed this piece on Florida Derby Betting Odds, check out other amazing articles at our horse racing news section!